Skip to content
AMARILLO — Cold and rainy weather in the Texas Panhandle didn’t prevent Permian from taking care of business on Thursday night. After taking a 17-13 halftime lead over Tascosa, Mojo executed a game winning drive late in the fourth quarter. The Panthers preserved a 32-25 District 2-6A victory at Dick Bivins Stadium. 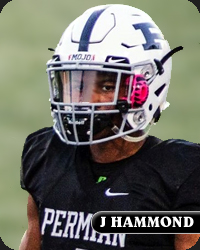 Seniors Peyton Powell and Justin Hammond contributed a pair of pass-and-catch touchdowns in the slugfest with the Rebels.  The second one, a heroic 49-yard game-winning strike, coming with just 46 seconds remaining on the scoreboard display.  For the evening, Hammond hauled in three passes for 93 yards and added another 50 yards rushing.

Permian opened the game with a 10-play, 79-yard scoring drive that was capped off on a 3-yard touchdown run by Ed Williams.  The senior running back finished the night with 80 yards on 19 carries.  The Rebels tied the game on the ensuing drive after recovering a fumble in the endzone.

The Panthers regained the lead on a 14-yard Powell-to-Hammond connection early in the second quarter, and Carson Roberts nailed a 28-yard field goal to extend that lead to 17-7.  Tascosa narrowed the margin on a 5-yard TD run by Max Burleson to cap off a 14-play, 74-yard scoring drive.  The Rebels trailed by four at the intermission.

Tascosa got the ball first in the third quarter, but the Mojo defense forced a three-and-out to setup the Panthers near midfield.  Five plays later, Powell danced his way to paydirt on a 28-yard scamper for a 24-13 Permian lead.  The senior quarterback accounted for 68 yards rushing, while throwing for another 199 yards.

On the next possession, the Permian defense again arose to the occasion and thwarted a fourth down attempt by the Rebels.  Unfortunately, Permian gave the ball back on a fumble the very next play.  Tascosa converted the miscue into points when Parker Settle scored on a 8-yard TD run to cut the lead to 24-19 to end the third quarter.

The game intensified as the final 12 minutes of the fourth quarter got underway.  A gutsy failed fake punt by the Panthers gave Tascosa great field position at the 48-yard line.  Two plays later, King Doerue gave the Rebels their first and only lead of the game on a 31-yard TD run with under seven minutes to play in regulation.  Permian took possession and worked their way down the field.  Facing a fourth-and-18 on the Tascosa 42, an intended pass for the endzone was intercepted at the 4-yard line.  The Rebels held a one-point lead and all they now needed to do is run out the remaining three minutes of clock.

Tascosa was unable to move the ball or get a first down and was forced to punt with 1:03.  Mojo had one more chance, starting at the 49-yard line.  After an incomplete pass sailed too tall, the stage was set for the game winning next play.  Powell found Hammond streaking down the left sideline and threaded a long pass right on the money.  Hammond caught the ball in stride and crossed the goal line to recapture the lead and victory with 46 seconds left in the game.

Permian improves to 5-2 for the season and 2-0 in district.  The Black Cats will host the Midland Bulldogs on October 26, the weekend eve to Halloween under the Friday Nigh Lights of Ratliff Stadium.