Skip to content
ODESSA — Sometimes you just know how things are going to turn out.  Permian and Odessa High met on Friday night at Ratliff Stadium to launch the 2018 district slate of games.  After jumping out to a 35-10 halftime lead, the Panthers sprayed a 42-10 decision on the Bronchos. 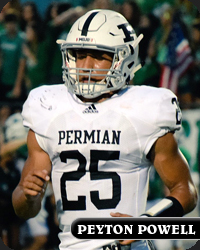 In the 60th PHS-OHS crosstown meeting, Permian’s Ed Williams rambled 86 yards to paydirt on the second play of the game to set the tempo for what was to come.  Odessa High responded with their own touchdown on the ensuing kickoff with a 70-yard return.

The feverish pace continued on the Panthers’ second possession.  After reeling in a 33-yard pass, Justin Hammond hauled in a `16-yarder from Peyton Powell to cap off the 8-play scoring drive to up the tally to 14-7.  The Mojo defense denied the Bronchos on the next series of downs to force a 27-yard field goal to narrow the deficit to four to end the opening stanza.

Mojo cranked it up in the second quarter.  Powell took charge and added two touchdown runs to extend the lead to 18.  He connected with Kaden Horrell on a 33-yard strike to set up his first touchdown run of 19 yards.  While the Permian defense flexed its muscle, Powell made it back into the endzone on a 7-yard run to give the Panthers a 28-10 lead.  Reaching into their bag of tricks, Powell hit Mason Sellers behind the line of scrimmage, and Sellers hooked up with a streaking Hammond for a 34-yard TD pass to up the lead to 35-10 at the half.

Permian switched gears in the second half and went to a more ball-controlled tempo.  Powell scored his third touchdown of the game late in the third quarter.  After a defensive stop inside the Panthers’ redzone, the Mojo offense put together a long sustaining 9-play scoring drive that covered 84 yards.  The senior quarterback scampered 18 yards to cap the drive and second half scoring.

Powell finished the night with 82 yards rushing, while passing for another 164 yards.  Williams rushed for a game-high 186 yards on 16 carries.  Hammond had six catches for 140 yards, while Horrell caught two passes for another 55 yards through the air.

The Panthers improve to 4-2 on the season and 1-0 in district play.  Permian will turn its attention to the Panhandle as Mojo travels to Amarillo Tascosa on next Thursday at Dick Bivins Stadium.

“…oh yeah, to the vandals that painted on our buildings – why don’t you spray paint 42-10 in your annuals when you get them in the Spring!”