Skip to content
Odessa, TX — On a cold and rainy night,  Permian and Abilene Cooper met at Ratliff Stadium to decide who would be the 1994 District 4-5A Champion.  The Cougars jumped out to a 16-10 halftime lead, but were shutout in the second half by the Panthers for a 31-16 Mojo victory. 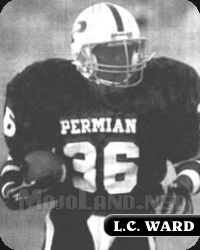 Cooper’s no-huddle offense looked unbeatable on its first possession of the game, a 12-play, 85-yard touchdown drive. Cooper converted three consecutive third downs on the drive, the last being a TD pass down the left sideline. The two-point conversion was good, giving Cooper an 8-0 lead. Permian answered with a 13-play, 75-yard scoring drive. L.C. Ward capped the effort on a 1-yard plunge, and Jason Prann passed to tight end Jason Kitchens to tie the score at 8-8.

Cooper’s next two drives ended with fumbles. The first was turned over to Permian but not converted into a score, but the second gave Permian a safety and a 10-8 lead.  With defensive end Eric Williams closing in, the Cougar quarterback caught in the back of the end zone. Cooper got the ball back with 1:32 left in the half. An 18-yard screen pass set up a 40-yard strike that went to the house. A second 2-point conversion was successful for a 16-10 Cougar lead at the half.

The Mojo defense took over the game, keeping the Cougars off of the scoreboard in the second half.  Midway into the third period, Prann completed his only pass attempt, an 8-yarder to JaQuay Wilburn at the Cooper 5. Ward scored two plays later on a short run, and Jeremy White put Permian ahead for good at 17-16.

Weather continued to dampen Cougar hopes as they struggled to hold on to the ball.  Jeremy Marin recovered a fumbled snap early in the fourth quarter. Prann avoiding tacklers in the back-field and down the sideline on a rollout for a 25-yard gain to the Cooper 27.  Ward rambled untouched for a 26-yard touchdown to push the Mojo lead to 24-16. Linebacker Heath Moody iced the win 10 seconds later with an interception at midfield.  Ward padded the Permian lead, crossing the goal line with two minutes left in the game.

The clock ran out on Cougars, and along with it their hopes of a district title.  The bell will reside on the Panther sideline this coming playoff run and for the 1995 season.  Ward finished the night with 165 yards on 32 carries and four touchdowns.  Wilburn had 11 touches for 43 rushing yards and another eight yards receiving. 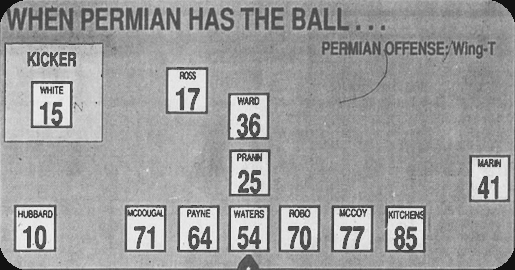