Skip to content
Irving, TX — Permian and Converse Judson traded punches back-and-forth during the 1995 State Championship game.  It all came down to a pass interference that wasn’t called, instead became an interception in the 31-28 barnburner at Texas Stadium. 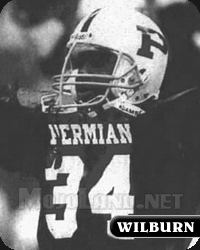 After converting a 3rd-and-8, the Mojo offense continued their march to regain the lead.  Trailing 31-28 near midfield, Jason Prann rolled right and launched a long pass downfield to 27-yd line. Lining up for the first down reception, Heath Moody was abruptly held and knocked off course by the left cornerback.  Judson’s Levon Wilson made a play on the ball and intercepted the pass with 59 seconds to preserve the victory for the Rockets.

After both teams traded jabs in the first two possessions, Permian went to work late in the opening quarter.  Mojo utilized four different ball carriers to drive into Judson territory.  Ja’Quay Wilburn took a pitch to the right, and scored virtually untouched from the 34-yard line for a 7-0 first quarter lead. The Panthers had a chance to add to extend the lead but missed a 27-yard field goal early in the second quarter.

Momentum shifted in Judson’s favor in the second quarter.  The Rockets put together a 15-play, 80-yard scoring drive that ended with a 2-yard touchdown run to tie the game midway in the quarter.  After Permian was forced to punt, Judson’s offense was back on the field.  They executed a two-minute drill that covered 51 yards.  A 10-yard pass to the back of the endzone capped off the go-ahead touchdown and gave the Rockets a 14-7 halftime lead.

Judson came out in the second half and took over right where they had left off.  The opening drive of the third quarter was good for three more Rocket points.  Permian answered with a scoring drive of its own.  Wilburn scored his second touchdown on a 20-yard scamper to cut the deficit to 17-14.  With Judson threatening deep into the Mojo end of the field, Prann intercepted a pass and rambled 82 yards the other direction to give Permian a 21-17 lead with 25 seconds left in the quarter.

A 90-yard catch-and-run on 3rd-and-20 allowed the Rockets to regain the lead to start the fourth quarter.  Judson came back and added to their tally on a 10-yard touchdown pass to make it 31-21.  Back the Panthers came.  This time on a 41-yard strike from Prann to Jonathan Armendarez. The Permian defense forced a punt to get the ball back with 1:37 to play.

The final drive was cut short on a no-call interference with the Panthers moving the ball and having the momentum.  Wilburn finished the afternoon with 181 yards rushing on 18 carries and two touchdowns. 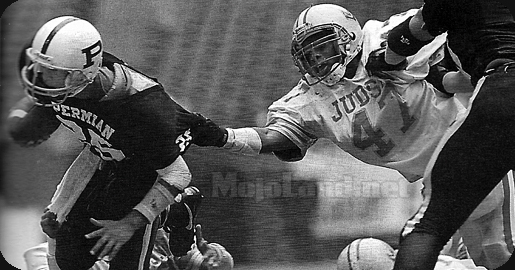