Skip to content
Irving, TX — After falling behind 14-7 to San Antonio Marshall, Permian racked up 20 unanswered second half points to claim a 27-14 victory on Saturday afternoon.  The 1991 Class 5A State Championship win in Texas Stadium marks the sixth state crown for the Panthers. 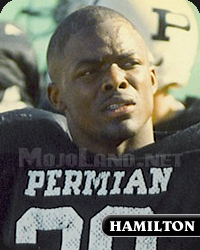 Marshall, led by Anthony Priest Holmes and Carlos Reza, set an early tempo that would carry into halftime. Taking the opening kickoff and marching 74 yards with 16 running plays, Reza capped of the scoring drive on a one-yard plunge on a 3rd-and-Goal. The scoring drive consumed 8:29 of the first quarter. Allen Strambler took the ensuing kick at the Permian 19 and ran it out to the 38-yard line. On the first play from scrimmage, the Panthers broke off a huge run but the ball got stripped and the Rams recovered at their own 33.

The Mojo defense immediately responded and handed Marshall a minus 13-yard series and forced a punt.  The Permian offense took over on the Ram 46.  Malcolm Hamilton settled in and broke off a 12-yard run.  The drive carried over into the start of the second quarter.  On a 4th-and-7 with the ball on the Marshall 32, Stormy Case connected with Will Wagner streaking down the left sideline for a Mojo touchdown.

The Panthers forced another three-and-out and went back to work on their own 17.  After another Permian fumble on a quarterback scramble, the Rams converted the miscue into a 3-play, 29-yard scoring drive to reclaim their seven point lead.  Trying to tie the game late in the second quarter, the Panthers had a pass intercepted as they entered the Ram end of the field.  Three turnovers in the first half and Permian only trailed 14-7 at the intermission.

The Panthers came out of the locker room with fire in their eyes.  The Mojo defense crippled the Ram running game, while the Permian offense scored on the next three consecutive possessions.  The Black Cats received the second half kickoff and methodically moved down the field.  With a balanced mix of pass and run, Permian ran nine plays to cover 62 yards in four minutes. Sophomore running back John Williams took a toss sweep to the right, and went untouched into the endzone to knot the game at 14-14.

Holding Marshall to one yard and a three-and-out, Mojo readied to take the lead on the next possession.  Williams would again reach paydirt, this time from 10 yards out to cap off a 7-play, 47-yard scoring drive.  The third quarter came to an end with Permian in front, 21-14.

One the next set of downs, the Rams started at their own 30-yard line.  They utilized 12 consecutive running plays to maneuver their way to the Permian 30.  On a 4th-and-3, the Mojo defense rose to the occasion and denied Marshall the first down.  The Panthers milked just over six minutes off of the game clock, behind the running of Williams and Malcolm Hamilton.  The tandem would help put the game on ice with a 15-play, 70-yard scoring drive.  Patrick Strambler skated to the right on a short TD run to finish the effort.  Permian had scored 20 unanswered points and completely taken over the game.

With the 27-14 win, Permian has now won six State Championships.  Though he did not reach the endzone, Hamilton finished the day with 107 yards rushing on 19 carries.  Williams had two touchdowns added 64 ground yards.  Kendrick Parrett caught four passes for 53 yards, while Will Wagner had three receptions for 48.