Skip to content
Odessa, TX — Permian slapped a convincing notch in the win column following Friday’s Homecoming celebration at Ratliff Stadium.  Palm Desert, the first team from California to play the Panthers, ended up on the short end of a 47-14 defeat. 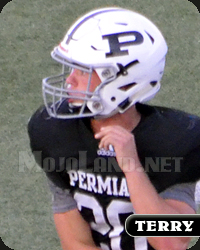 While Palm Desert wasn’t the caliber of the likes of DeSoto or Southlake Carroll, both are state-ranked teams the Panthers have played this season, the Aztecs gave a valiant effort after such a long journey (975 miles).  For Permian, the Panthers seemed to play with much more focus and intensity than in the past few games.  The victory halts a three-game skid that Mojo will gladly accept.

The Black Cats were able to march down the field on the opening drive, and Carson Roberts kicked a 37-yard field goal for the game first points.  Three plays later, the Aztec punter mishandled a snap in the endzone for a safety to give Permian a 5-0 lead.

After the free kick, the Panthers ran two plays before fumbling the ball back to Palm Desert.  The Aztecs took advantage of the gift. On the next play from scrimmage, senior running back Simon Gaete reeled off a 41-yard touchdown run for the Southern California team to own a 7-5 edge.  It would be Palm Desert’s only lead in the game.  Chase Stell returned the ensuing kickoff out to the 40, but five plays later another Permian fumble wasted the good field position.  The Mojo defense held the Aztecs in check, forcing a punt as the first quarter came to an end.

Permian lit up the scoreboard in the second stanza with 28 points.  A little trickery played springboard to the assault.  Quarterback Harper Terry pitched the ball back to sophomore Kayden Baze, which in turn slung the rock downfield to Alex Rose for a 52-yard pickup.  From there, Malachi Medlock found paydirt on a 13-yard TD run.  Ten seconds later, Mark Samaniego scooped up an Aztec fumble and took it to the house to give the Cats a 19-7 lead.

On the next series, the stingy Mojo defense forced another turnover.  Kendyn Armstrong hauled in a deflected pass, and Terry converted that into seven more points for the Panthers.  Medlock would revisit the endzone before the quarter expired to give the Black Cats a 33-14 lead at intermission. 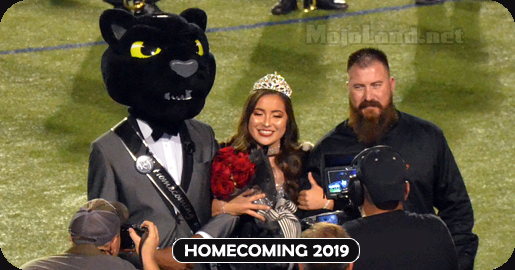 During the halftime show, nominees were introduced and Julianna Franco was announced as the 2019 Homecoming Queen.  Damian Christian, our Panther mascot, was selected as this year’s King.

Permian added two more touchdowns in the third quarter to put the game on ice.  Terry scored his second touchdown of the night on a 5-yard run that capped off an 11-play, 78-yard drive.  Medlock collected his third TD late in the quarter to close out the game’s scoring.  The sophomore running back led all rushers with 119 yards on 17 carries.  Terry finished with 50 ground yards and 61 passing.  Rose had two catches for 63 receiving yards.

The Panthers (1-3) will look for win #2 next Friday when they host Los Fresnos (1-3) back here at Ratliff Stadium.  The Falcons lost to Edinburg Vela 35-18 on Thursday night.