In the final game of the non-district schedule, Permian will again host Los Fresnos.  Last year, Mojo blasted the Falcons 56-0 under the Friday night lights of Ratliff Stadium.  The Rio Grande Valley team will visit the Permian Basin on September 27. 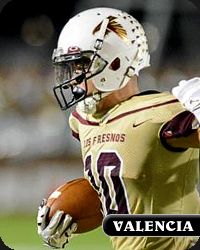 The Falcons return a total of five starters – three on offense and two on the defensive side of the ball.  Los Fresnos posted a 3-7 mark in 2018. They managed to win one of their five District 32-6A games.  The Falcons didn’t qualify for post-season for the first time since 2004.  They had previously made it to the third round of the state playoffs in three out of the last four seasons.

COMPARISON:
After starting 2019 with a win, Los Fresnos has lost the last three games.  Permian lost its first three, but picked up the season’s first win last week against California’s Palm Desert.  Both teams have averaged 23 points a game.  The Panthers have been at their best in the second quarter, while the Falcons save their strongest burst for the final 12 minutes.  The Los Fresnos offense has scored 101 points to Permian’s 96.  Defensively, the Falcons have given up 131 to the Mojo’s 146.  The Panthers have faced two state-ranked opponents.  None for the RGV counterparts.

AT THE HELM:
Patrick Brown returns for a fourth year as the Falcon head football coach.  He has compiled a 54-28 overall record as a head coach, and 20-16 in the valley.  Prior to Los Fresnos, he spent one year at San Antonio Sam Houston (10-1) and three years at El Paso Andress (24-11).  Brown is trying to implement an offensive formation similar to Amarillo Tascosa’s flexbone set.

OFFENSIVELY:
Wide Receiver Nicholas Valencia (6’1″ 180) is a four-year starter and has been a first-team All-District selection the past two seasons. With his size and catching ability, the Falcons hope to work Elian Gonzalez (6’2″  185) into the passing game.  The offense is led by junior quarterback Adrian Longoria (6’0″ 170).  While lacking varsity experience, the majority of the team played on a JV squad that went 8-2 in 2018.

DEFENSIVELY:
The defense is led by returning starting linebacker Leeroy Guerrero (5’9″  220) and defensive end Genaro Alvarez (6’2″  235).  Cameron Rivera (5’11”  190) had a solid year on the junior varsity and is expected to make an impact on the varsity level.