Skip to content
Odessa, TX — Prior to Friday’s non-district meeting between Permian and Southlake Carroll, the Dragon cheerleaders presented a check for over 21 thousand dollars to the Odessa Community Foundation.  SLC went on to hand out a 48-7 defeat of the Panthers. 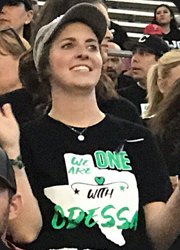 “We Are One with Odessa” shirts filled the visitor side of the stadium.  In a sign of solidarity, the Dragons also played the game in black pants instead of their traditional green ones.  It was the first time Carroll has worn them in a game other than during the state playoffs.

The Panthers held strong in the first 12 minutes of the contest.  Permian went on offense first, but had to punt after three running plays for short yardage.

The Dragons took over at their 28-yard line and utilized seven plays to get down to the Permian 5.  A 15-yard penalty backed them up, where they had to settle with a 32-yard field goal.  On the Black Cats’ next possession, a 20-yard pass was negated for an ineligible man downfield and the drive ended up stalling for another Carson Roberts punt.  Carroll used the remainder of the opening quarter clock on the next set of downs.  Quinn Ewers would cap off a 10-play, 54-yard scoring effort on a 22-yard scamper to paydirt to start the second quarter.

On the ensuing kickoff, Chase Stell reeled off a 47-yard return to give the Panthers great field position.  A false start penalty and three plays later the Cats were again punting the ball away.  Ewers took over the game from there.  The sophomore quarterback connected with three separate receivers on touchdown catches of 45, 54, and 18 yards to extend the deficit to 31-0 at the intermission.  Permian’s lone first down of the half came by way of a Carroll penalty for roughing the passer. 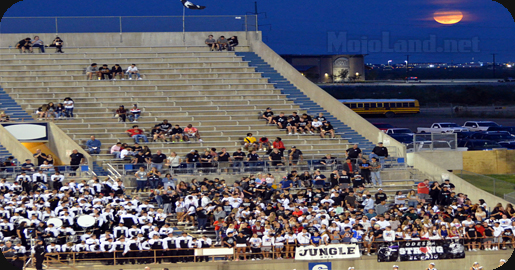 The Panthers continued to struggle in the third quarter, while the Dragons did not.  Ewers threw his fourth touchdown pass of the night on an 18-yarder on the opening drive of the second half.  He also capped off a 9-play, 89-yard scoring drive with a TD run late in the quarter to give Carroll a 45-0 lead.

Alex Rose erased the goose egg on Permian’s side of the scoreboard early in the final stanza.  The scoring drive covered 77 yards and on the ninth play, Rose made it into the endzone on a 13-yard touchdown run.  The Dragons answered with a 31-yard field goal to cap the scoring.

Rose led Permian rushers with 42 yards on five carries, while Harper Terry added 33 yards.  Jack Abram led Carroll with 110 yards (13 carries).  Ewers threw for 390 yards, completing 29 of 32 passes.  He also rushed for another 52 yards.  John Manero led the Dragons with nine catches for 133 yards, with Brady Boyd and Will Meyer finishing the night with 75 and 71 yards respectively.

With the loss, the Panthers fall to 0-3 for the year.  Not since the 2013 season has a Permian team gone winless through the first three games of a season.  The Black Cats will host Palm Desert (from California) next Friday for Homecoming.

Hats off to the Southlake Carroll organization.  You are a class act, and we appreciate the compassion and support.
#OdessaStrong  #DragonStrong  #TexasStrong