Skip to content
Odessa, TX — The annual Crosstown Showdown at Ratliff Stadium ended in another Permian victory over Odessa High.  After a sluggish start, the Panthers disposed of the Bronchos 24-0 to start District 2-6A with a win. 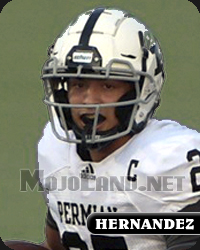 It was a Friday night that featured more yellow laundry on the turf than in a Boy Scout den mom’s clothes basket.  And, most of those penalty flags were handed out to the Panthers.

Easton Hernandez also made his return, after missing the past four games due to injury.  The game itself was dictated by Permian’s running game and stingy defense.  The Bronchos were held to a little over 100 yards of total offense, while the Panthers tripled that number.

Odessa High went on offense first and it took all of five plays for the Mojo defense to make an early statement.  Logan Phillips assisted in forcing an OHS fumble near midfield.  After an exchange of punts, the Permian offense set up shop at the Broncho 44.  Malachi Medlock rambled 27 yards to start the drive, but two short runs and an incomplete pass had the Panthers settling with a 32-yard field goal by Carson Roberts.  Another pair of punts followed as both offenses tried to get into a rhythm.  Late in the quarter, sophomore Kayden Baze intercepted his first of two OHS passes.

The Panthers continued to force hurried passes and stifle the little Red Pony running game.  The Mojo offense began racking up yards in chunks in the second frame.  Long runs by Hernandez and Medlock moved the ball from the PHS 9-yard line down to the Odessa High 30.  The sophomore running back capped off the 7-play, 91-yard scoring drive with a 20-yard romp to paydirt, while mowing over an OHS defender for a 10-0 lead.

On the following set of downs, Baze tipped a Broncho pass and Dashavion Williams hauled it in for another Mojo interception.  It took all of two plays for Permian to cross the goal line as Hernandez executed a QB draw from 17 yards out to close out the first half.  The Panthers led 17-0 at the break.

Permian went on offense to begin the third quarter.  Six plays, including a 59-yard run, and two penalties later the drive would stall at the OHS 28.  A three-and-out by the Bronchos gave the Panthers the ball back at their own 36.  Bra’dyn Brooks-Smith finished off a 5-play drive with a 44-yard touchdown run to give Mojo a comfortable 24-0 lead.  On the next set of downs, the Mojo defense recorded a sack and that was followed by Baze’s second interception deep in Broncho territory.  Penalties again marred the Black Cats’ efforts as they came away with no points from the turnover.

The fourth quarter saw two scoring opportunities dashed by yet again more yellow laundry and a turnover.  A 20-yard TD run by Hernandez was negated by penalty.  The Panthers also drove down to the Odessa High 4-yard line before fumbling the ball away.  Trying to erase the goose egg on the scoreboard, OHS had one last chance with two minutes left in the game.  On a 4th-and-15, the Permian defense sacked the quarterback on the 32-yard line.  The Black Cats took possession and the victory formation left the Bronchos without the ball… and without points on the board.

Medlock led all rushers with 107 yards on 10 carries, while Brooks-Smith had 86 yards from nine touches.  Hernandez added 59 ground yards and another 31 yards through the air.  The Panthers now turn their attention toward Amarillo Tascosa. The Rebels destroyed Midland High 63-6 on Thursday night in their District 2-6A opener.  Mojo will host the contest at Ratliff Stadium next Friday.