Skip to content
Odessa, TX — Permian dominated the non-district finale with a 56-14 defeathering of the Los Fresnos Falcons at Ratliff Stadium on Friday night.  The Panthers jumped out to a 42-7 halftime lead and cruised from there. 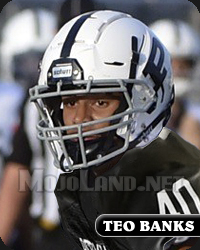 Los Fresnos went on offense first, and it took all of three plays for the Falcons to get on the scoreboard for a quick 7-0 lead.  Permian came back and answered with a quick score of its own.  Alex Rose rambled 45 yards on the first play from scrimmage.  Two plays later Harper Terry connected with Terran Limuel on a 25-yard touchdown pass to knot the game.

Teo Banks blocked the punt on the next set of downs, and Mark Samaniego alertly snagged the loose ball to set Mojo up on the Falcon 28.  The Black Cats immediately went to work.  A play action pass from Terry to Rose would net a 13-yard touchdown grab.  The Permian defense forced a three-and-out and got the ball back near midfield, but the Panthers fumbled it away four plays later.  Los Fresnos trailed 14-7 as the opening 12 minutes came to a close.

Permian opened it up in the second quarter with 28 unanswered points.  The Black Cats scored on every possession.  Neri Carrasco was recipient of a 40-yard TD strike from Terry.  Amarion Garrett was next with a 37-yard TD nab.  Los Fresnos put together a decent drive, but coughed up the ball on the Mojo 7.  Banks scooped up the pigskin and returned it 65 yards into Falcon territory.  Four plays later, Medlock punched the ball in from the 9.  Terry ran it in himself on the next possession to give the Panthers a 42-7 halftime lead.

The Black Cats continued to control the game through the third stanza.  Terry and Medlock each added a rushing touchdown.  Terry scored from 14 yards out on an 8-play, 70-yard drive.  On the next set of downs, Medlock bulled his way into the endzone on an 8-yarder that completed a 7-play drive.  The Panthers sat on a 56-7 lead after three quarters.

The Falcons were able to bookend the game by scoring the last points of the game midway in the final quarter.  Terry turned in a solid performance, throwing for 180 yards and adding another 60 rushing.  Medlock finished with 58 ground yards from 10 touches, while Rose had 37 rushing yards on four carries and 65 yards receiving.  Carrasco and Garrett had two catches each for a matching 49 yards.

The Panthers will now take a week off before the District 2-6A opener against Odessa High on October 11.  Permian will be the designated visitors and sit on the east side of Ratliff Stadium.