Skip to content
Irving, TX — With a kickoff temperature in the low teens, Permian endured the cold to complete a perfect 16-0 season.  With a 28-14 victory over Aldine, the Panthers secured the 1989 Class 5A State Champion title on Saturday afternoon in Texas Stadium.  They have also been named National Champions by sports television giant ESPN. 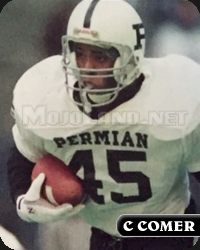 The Panthers entered the game trying to do one better than last year’s 14-9 State Semifinal loss to Dallas Carter.  The Mustangs, on the opposite polar end, were attempting to capture what had eluded them in every post-season venture… a state crown.  While both teams were able to move the ball in the opening quarter, neither team could put together a productive drive that would amount to erasing the goose egg on the scoreboard.

Permian broke the silence midway into the second quarter.  Facing a 4th-and-Goal on the 1, Chris Comer bulled his way into the endzone to cap off a 16-play, 75-yard scoring drive. Turnovers haunted the Mustangs.  They reached midfield in three plays on their next possession, but coughed up the ball and Todd Allen recovered. Mojo wasn’t able to capitalize on the miscue, but a Steve Womack punt pinned Aldine back on its own 5-yard line. It took all of two plays before the ball was again loose on the turf.  This time Chad Williams was recipient and the Panthers set up shop on the Mustang 8.  Stoney Case’s 4-yard bootleg gave Permian a 14-0 lead, a lead Mojo would take into the locker room.

The Mustangs received the second half kickoff and made it to 50-yard line… before suffering another miscue – their fourth fumble of the game.  The Panthers absorbed some clock and put together a 7-play scoring drive that covered 56-yards.  Comer crossed the goal line a second time to extend the lead to 21-0.  Aldine got on the board and cut into the Mojo lead on the next set of downs.  Derrick Johnson took a pitch to the right and weaved his way into open field for a 60-yard scamper to paydirt.  Permian was forced into a three-and-out, but another Womack punt left the Mustangs deep in their own end of the field.

Aldine’s run-based Veer offense produced a 13-play, 97-yard scoring drive to narrow the deficit to 21-14 three minutes into the fourth quarter.  With momentum shifting, the Mojo offense went back on the attack.  Dishing out a heavy dose of 10 consecutive running plays, Comer and Arvey Villa helped chew up over five minutes of game clock.   A 15-yard play action pass from Case to Mike Faulkner with 3:46 remaining destroyed any chances of a comeback by the Mustangs.

Lloyd Hill not only accounted for five of the game’s six receptions, but was instrumental in Mojo’s defensive effort.  Comer finished the afternoon with two touchdowns and 177 rushing yards on 35 carries, while Villa rushed for another 81 yards from 11 carries.