Skip to content
Irving, TX — Permian and Beaumont French met in Texas Stadium to lay claim to the 1984 State Champion crown.  The Panthers (15-0) entered the contest as the top-ranked team in Texas, while many wondered if the Buffaloes would even be able to stay in the game. No one anticipated the game would end in a bittersweet 21-21 tie. 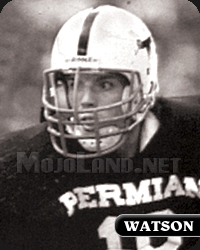 Permian drew first blood when junior Greg Anderson returned a Buffalo punt 83-yards for a quick 7-0 advantage. French answered two plays later with an 11-yard touchdown run to tie the game. After the Panthers had a punt partially blocked, Mark Guilbeaux launched a 36-yard TD pass late in the first quarter to give French its first lead.  The Panthers now trailed 14-7.

The Buffaloes padded their lead with a 10-yard TD strike with three minutes left in the first half. With time running down in the second quarter, a 27-yard pass from Alton Holloway to Anderson on 4th-and-16 set the Panthers up just outside the goal line. Dal Watson capped off the 12-play scoring drive to make it a 21-14 game in favor of French at the intermission.

Two key receptions by Diron New in an 8-play drive setup a short TD run by Watson to re-knot the game at 21-21 in the third quarter. On the following set of downs, Danny Servance intercepted a Buffalo pass at the 41-yard line for an apparent pick-six but a penalty nullified the effort. Neither team could add to their tally from there. The Panthers also had an offensive touchdown negated by an illegal formation penalty out of the Wing-T, a formation Mojo had run the whole season without issue.

Each team exchanged punts for field position to start the final stanza.  With under six minutes to play, Permian threatened to break the deadlock.  Holloway connected with Watson on a 20-yard strike to set up shop just inside the Buffalo redzone.  Three plays later, Anderson hauled in a bullet to give the Panthers a 1st-and-Goal at the 8-yard line.  On the next play, Rich Fletcher rambled across the goal line for the go-ahead touchdown only to find yellow laundry on the field.  Back-to-back procedure calls moved the ball back to the 18.  A 10-yard pass to Anderson had Mojo again knocking on the door.  An attempted pass to Fletcher was intercepted at the 6-yard line to snuff out the scoring opportunity.

The Permian defense continued to do their job and gave the offense one more crack at putting points on the board.  The Panthers methodically moved from their own 34 to the Buffalo 31 utilizing six consecutive running plays.  With just 31 seconds remaining, disaster again struck the Mojo offense by way of another intercepted pass.  French took over at their own 30-yard line.  After a 20-yard running play, two incomplete passes, and quarterback draw, the Buffaloes had one final chance with the ball sitting on the Panther 46.

With 0:04 left on the clock, Bobby Rodriguez punched the ball out of Guilbeaux’s hand.  John Fuller scooped up the loose ball on the Mojo 45-yard line. He then lateraled to Mitch Madison, who rambled down the left sideline and into the endzone for an apparent 55-yard game-winning touchdown. But under U.I.L. rules in 1984, fumbles couldn’t be advanced.  The game ended with the Panthers and Buffaloes co-champions.

Watch the complete game on the SportzMedia YouTube channel