Skip to content
Irving, TX — Trailing 19-7 at the half, Permian shut down Port Arthur Jefferson’s high-powered offense to claim a 28-19 decision in the 1980 Class 5A State Championship at Texas Stadium.  Permian slapped 21 unanswered point on the scoreboard in the second half. 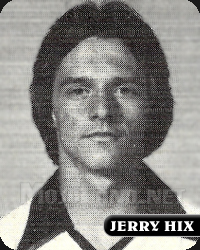 All week long, newspapers and local sportscasts made it abundantly clear – the Panthers were going to have their hands full trying to stop the duo of Dodge-Duhon.  In the first half, quarterback Todd Dodge and receiver Brent Duhon lived up to the media hype.  On the second play of the game, the duo connected for 27 yards but the opening drive stalled.  They got the ball right back after a pass intended for Eddie Pinnell got intercepted at the Permian 42.

The Yellow Jackets took advantage of the field position, and scored the quarter’s only points with an 8-play, 42-yard drive. The effort included a 15-yarder to Duhon.  Stephen Nold blocked the extra point attempt for the Panthers to trail 6-0.  Permian responded with a 12-play possession that covered 74 yards.  Jerry Hix found daylight on the left side of the line and scored from two yards out.   The drive spilled over into the second quarter with Mojo now on top 7-6.

After an exchange of punts, Jefferson took over with good field position on top of the Texas Stadium star.  Three plays later, Duhon beat Terry Rice to the ball on a 21-yard touchdown strike.  Bobby Massey intercepted the 2-point attempt, resulting in a 12-7 Yellow Jacket lead midway through the second period.  Duhon made his way back into the endzone to extend the TJ lead to 19-7.  Facing a 3rd-and-17, a Jefferson screen pass came up well short of the first down but a questionable facemask call kept the drive alive.  Duhon’s second TD came from 15 yards out.

The Black Cats received the second half kickoff, and Coy Brown returned the ball to the 44-yard line.  Three plays for negative yardage forced a Mike Williams punt to the TJ 25.  The Yellow Jackets rumbled down the field and got to the Permian 26.  On third down, Dodge threw to the endzone only to have Mark Glasscock waiting for an interception and touchback.  Permian was unable to take advantage of the turnover and had to punt the ball away.  Taking over at the Mojo 44, Jefferson used nine plays to threaten at the 10-yard line.  The Panther defense put the clamps on the drive, and a missed field goal attempt left the score at 19-7 late in the third quarter.

The ensuing series consisted of four plays.  From the 20-yard line, Permian picked up a first down on two running plays.  Dale Carr ripped through the line on a 32-yard scamper.  Hix hit Jimmy Morris on a perfect touch pass good for 38-yards and a Mojo touchdown.  The Panthers had cut the deficit to 19-14 as the quarter expired.

The Yellow Jackets started the fourth quarter pinning the Panthers on the 12-yard line.  Permian picked up a first down but then faced a fourth-and-long.  The Mojo Magic was about to begin.  Williams punted the ball to midfield, where it was mishandled and Dean Gibson came up with the fumble recovery.  Mike George hauled in a 17-yard pass to start the drive.  Carr and Kent Sager led the ground assault, and Carr capped off the 8-play scoring drive from six yards out.  Mojo had taken a 21-19 lead with just over four minutes to play.

Trying to regain the lead, Jefferson utilized six passing plays to get near midfield.  On a 4th-and-1, Dodge rolled to the right but his pass fluttered incomplete.  Permian took over on downs, but fumbled on the first play from scrimmage.  The Yellow Jackets were given one last chance.  Setup at midfield, the first two passes were broken up.  A third down sack of 12 yards was administered by Nold and Dan McGrew.  Out of timeouts and facing 4th-and-22, Dodge completed the pass but was well short of the first down marker.  Jefferson turned the ball over on downs with 2:07 left in regulation.

When the Panthers were finally able to get the whiff of a third State Champion title, they reacted like sharks to the smell of blood.  What ensued put an exclamation point after MOJO.  It took all of three plays, when Sager broke through the right side of the line and peddled past defenders en route to a 40-yard touchdown run.  The Panthers had erased the 12 point halftime deficit and won going away with a 28-19 defeat of Jefferson.

Sager led Permian rushers with 72 yards from 10 carries, and Carr followed with 49 yards on six touches.  Morris finished the afternoon with three catches for 58 yards, while George added another 40 receiving yards.