Skip to content
San Angelo, TX — Two fourth quarter turnovers by the Panthers was all Austin Reagan needed to claim the 1970 Class 4A State Championship.  Permian had opportunities to put the game away in the second half, but came up short in a 21-14 loss at San Angelo Stadium. 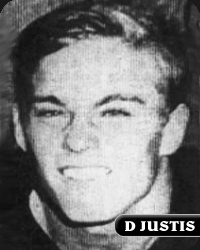 It was obvious the Raiders planned to stop the Daniel Justis and the Black Cat running game.  Reagan’s ability to capitalize on miscues in front of 17,500 fans prevented Permian from taking the state crown back to Odessa – the second time in three years.

The Panthers went three-and-out in the opening possession, and the Raiders took over on their own 36.  They immediately rambled 64 yards in 13 plays, capping the drive with a 3-yard jaunt off right tackle.

Joe Bob Bizzell returned the ensuing kickoff to the Permian 34. On the first play from scrimmage, Ben Montgomery took the snap and attempted to pitch back to Collins Rice.  The middle linebacker read the play perfectly and was waiting for the ball.  He intercepted the pitch and went untouched into the endzone for another Raider tally.  Reagan now sat on a 14-0 lead in the opening stanza.

The Black Cats were able to erase the goose egg of their side of the scoreboard in the second quarter.  Permian set up shop on its own 23 after a Reagan punt.  On first down, the Panthers uncorked a halfback pass.  Rice lofted the aerial bomb to Bizzell, who made a fantastic grab while falling backward and landing at the Reagan 16.  Justis rammed his way across the goal line to cut the deficit in half midway through the quarter.

The Raiders mounted a scoring drive of their own.  Starting at their own 19-yard line, the time consuming drive covered 81 yards in 15 plays.  As the clock ran out on the first half, the Panthers trailed 21-7.

Permian scored the only second half points late in the third quarter.  However, it was the self-inflicted miscues that proved fatal the final 24 minutes.  After another Reagan punt, a double-reverse was intercepted at the Raider 2-yard line.  Four plays later, the Cats had the ball again and this time they were not to be denied.  Mark Groves scored on a quarterback sneak to cap an 8-play, 38-yard drive.  By quarter’s end PHS needed to make up the seven point difference.

The Permian defense again rose to the occasion and forced another punt.  Gordon Jarman took the ball on the fly with a daring catch and raced from midfield to the Reagan 32.  After picking up a first down, the Panthers faced a 4th-and-3 at the Raider 10.  Jamie Berryhill took the ball on an end sweep, but came up a yard short and ball went over on downs.  A story of frustration would continue… two fourth quarter Black Cat fumbles nullified any hope of rallying late.  The Raiders held on to their 21-14 lead to claim the state’s top honor. 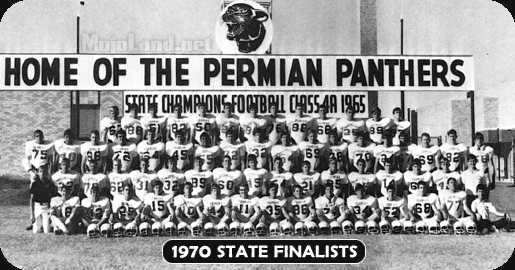