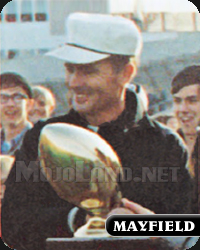 The Panthers went on offense first at the 28-yard line. The opening drive ate 4:23 off the clock and consisted of 13 plays. While Permian showed it had the ability to move the ball, but a bad pitch on 4th-and-8 resulted in South Oak Cliff taking over at the 44. The Bears’ first effort covered 26 yards in eight plays. Larry Bates ended the drive by dumping the quarterback for a six-yard loss on fourth down. The second PHS drive ended in another turnover at the SOC 35.

The Bears fared better on their second drive and posted the game’s first points on the board.  The 65-yard drive took six plays and was capped off by a short run to give South Oak Cliff a 6-0 advantage.  It would be the only score of first quarter.

A low snap in the second stanza led to Permian matching the tally.  SOC was attempting to punt when the offensive line collapsed.  Defenders gang tackled the punter and the Black Cats were in business deep in Bear territory.  Facing a 4th-and-4 on the 16-yard line, Joe Bizzell followed the blocks of Bates and Justis to get inside the 12.  Two players later, Bates bulled his was into the endzone.  The extra point went wide left and the game would remain tied at the intermission.

After the third quarter kickoff was returned to the 18, a clipping penalty backed up the Bears to their 9-yard line. On the first play from scrimmage, the ball dropped to the turf and Bates recovered at the 3. Justis scored on the next play for a 12-6 Permian lead. After the ensuing kickoff and three plays, another fumble gave the Panthers the second scoring opportunity of the quarter.  From the SOC 26, it took all of four plays for Justis to find paydirt from six yards out.  The fake kick two-point pass attempt fell incomplete, leaving Bears on the short end of a 18-6 deficit.

The Bears were their own worst enemy again late in the quarter. A holding penalty and quarterback sack backed Oak Cliff to the 6-yard line. The ball hit the turf yet again and Jeff Burk recovered. The celebration would be short lived as Permian fumbled on the next play at the 1. SOC answered with its only touchdown of the second half – a 15-play, 99-yard drive that consumed six minutes off the clock. A 4-yard run on a quarterback option narrowed the difference to 18-13 late in the third frame.

The Panthers were halted on the next possession, but a 57-yard punt was fumbled at the SOC 24 to start the fourth quarter. Permian was unable to convert the miscue into points, when a 37-yard field goal attempt missed its mark. An exchange of kicks chewed another five minutes off the clock. With 2:39 left in the game, the desperate Bears tried to pass from their own endzone, only to have Mike Culpepper nab the pass at the 28 and return it for a PHS touchdown.

Sitting on a 25-13 lead, the Black Cats dished out their exclamation point in the final minute of the game.  The Permian defense recorded their second interception on the 34-yard line.  This time Jimmy Patterson was the recipient.  Two plays later, Justis barreled across the goal line as the clock ran out for an 11-yard touchdown run.

Justis finished game with 85 yards on 19 carries and three touchdowns.  Rice had 13 carries for 53 yards, while Berryhill added another 38 yards rushing on 11 efforts.  Permian will meet Austin Reagan next week in a State title game rematch.  The two met in San Angelo in 1968 with the Raiders coming out on top, 17-11.