Skip to content
Austin, TX — Permian left no doubt who was 1972’s best in the state in Class 4A, after handing Baytown Sterling a 37-7 lashing in UT’s Memorial Stadium.  This is the second State Champion crown for the Panthers.  They also won a state title in 1965. 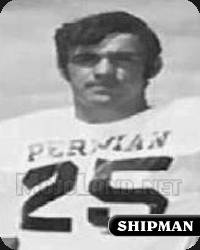 The Panthers received the opening kickoff and made their way to midfield before having to punt the ball away.  The Rangers collected a pair of first downs on their first drive, but also had to punt the ball after stalling on the Permian 45.

The Mojo offensive machine, behind quarterback David Shipman, got rolling on the second possession.  Starting on their own 25, the Panthers ran two short yardage plays before unleashing the heavy artillery.  Shipman connected with Joe Bob Bizzell on a 38-yard catch-and-run, and followed that with a 33-yard scamper to paydirt.  A missed extra point resulted in a 6-0 Permian lead that lasted the opening quarter.

The Panthers extended their lead in the second stanza with a heavy dose of Ricky Sutherland.  Permian’s third drive of the game covered 65 yards in 10 plays, capped off by short run by Shipman.  The Rangers fumbled on the first play from scrimmage, giving Mojo the ball back on the 48.  It took all of five plays before Sutherland scored from five yards out.  Sterling cut into the lead late in the quarter on a 10-play, 67-yard drive.  A touchdown pass of 34 yards narrowed the deficit to 18-7.  The score would hold into halftime.  The Rangers never got any closer.

Turnovers dominated the third quarter, but the Black Cats were able to add another touchdown in the exchange.  The Rangers took the second half kickoff, and ran six consecutive running plays.  The Permian defense snuffed out the drive on the seventh play and Ray Nunez recovered a fumble on the 50-yard line.  Shipman converted a 4th-and-6 on the Sterling 32, threading a 15-yard pass to Bizzell.  The effort got nullified as the Rangers intercepted a pass in the endzone.  The Panthers right back in business two plays later when Roy Bobbitt returned the favor and picked off a pass at the Sterling 21.  Facing another fourth down, Bizzell hauled in 12-yard TD strike from Shipman for a 24-7 Mojo lead.

With the game completely at hand, Permian slapped another 13 points on the board in the final 12 minutes.  Chuck Fields opened the fourth quarter with a 23-yard burst from the 50.  Five plays later, Sutherland crossed the goal line on a 1-yard dive.  After a Sterling three-and-out, Sutherland tacked the final points up for a 37-7 Mojo lead.  The final score capped off a 13-play scoring drive that began on the Permian 32.

The Panthers finish the 1972 season undefeated and bring home a State Champion trophy to go beside the 1965 one.

Watch the complete game on the SportzMedia YouTube channel.
(The video is old and there are some rough spots)