Skip to content
Odessa, TX — It was a clash of two District 2-6A unbeatens as Permian and Amarillo Tascosa met at Ratliff Stadium on Friday night.  Picked as underdogs by Texas Football magazine, the Panthers controlled all facets of the game in the 35-27 decision over the Rebels. 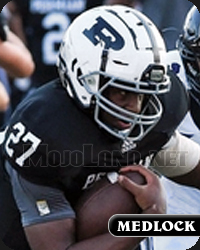 Permian stunned Tascosa early as they unleashed 21 first quarter points to take a 21-13 lead.  The Rebels put together an 11-play, 75-yard scoring drive to open the game.  Not to be out done, the Panthers answered with their own 65-yard drive in just four plays, capped off with a Malachi Medlock 9-yard scamper.

The Mojo defense forced a three-and-out on the next series of downs.  That would lead to a 57-yard TD drive with Alex Rose finding paydirt from nine yards out for a 14-6 PHS lead.  On the next play from scrimmage, Tascosa’s Joseph Plunk broke into open field and out ran everyone for a 75-yard touchdown run to narrow the Black Cats’ lead to a single point.  The slugfest continued as Easton Hernandez navigated another scoring drive that covered 59 yards in six plays to give the Panthers a 21-13 lead at the end of the first 12 minutes of action.

After a Tascosa punt early in the second quarter, Chase Stell returned the kick back to the Rebels’ 36-yard line.  Permian was back on the attack in great field position.  It took six plays, including a 33-yard strike from Hernandez to Terran Limuel, for Mojo to add to their tally.  The senior quarterback called his own number from four yards out and Permian sat on a 28-13.  Tascosa tried to get back in the game, and almost succeeded, after their next drive made its way inside the Black Cat redzone.  An incomplete pass on fourth down stifled the threat.  Halftime came and the Panthers remained ahead with a two touchdown lead.

The Rebels managed to cut into the deficit in the third quarter.  Plunk contributed two big-play runs in an 8-play, 71-yard scoring drive.  A Darius Sanders touchdown run from seven yards out had the Rebels nipping at Mojo’s heels.  As the quarter ended, Permian still led 28-20 but Tascosa had intentions of closing the gap.

The Panthers were able to chew up almost five minutes of clock as they methodically marched down the field in the fourth stanza.  The 80-yard scoring drive was capped off with a 2-yard plunge by Medlock to extend the lead back to 15 points.  It took all of two minutes for the Rebels to cover 75 yards during the next set of downs.  A 9-yard pass from Plunk to Major Everhart had Tascosa trailing 35-27.  The score would hold the remaining five minutes of play for the Mojo win.

Hernandez finished the night with 21 carries for 155 yards rushing and 33 yards passing.  Medlock racked up 142 ground yards with 22 touches.  Hernandez and Medlock each scored two touchdowns.  Limuel was recipient of the lone completed pass of 33 yards.  Credit the entire Mojo defense for a solid four quarters of “bend-but-don’t-break” performance.  Several Permian defenders spent time in the Tascosa backfield.

The Panthers (2-0) will travel to Grande Comm Stadium next Friday to take on  Midland High (0-2) as district play will continue.  The Bulldogs were shutout 33-0 by Frenship (1-1) in other 2-6A action tonight.