Skip to content
Midland, TX — Going into Friday night’s District 2-6A game with Midland High, the concern by many was will Permian be overlooking the Bulldogs.  That answer came early and ended loud as the Panthers dished out a 62-0 blanking of MHS at Grande Communications Stadium. 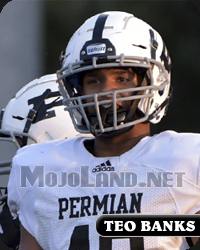 The score sets a new school record.  The largest margin of victory vs. Midland High was 59-0, set by the 2015 team.  Tonight’s final score tops the previous record by three points.

Midland High went on offense first.  The Mojo defense gave a quick preview of what kind of night would lie ahead.  The Bulldogs were limited to a mere six rushing yards and punt to open the game.

Permian answered with a 9-play, 56-yard scoring drive, capped off with a 4-yard touchdown run by Easton Hernandez.  After a MHS fumble, Malachi Medlock bulled his way into the endzone from two yards out for a quick two touchdown lead.  On the third play of the Bulldogs’ next possession, Teo Banks nabbed a pass and returned it to the house for another Mojo touchdown. The Permian defense continued to flex its muscle and gave the offense the ball on the Midland 27-yard line.  It took all of one play for Terran Limuel to break free and find the endzone for a 28-0 first quarter lead.

The Bulldogs opened the second quarter with a three-and-out for negative yardage and a punt.  The Panthers ran four plays that covered 62 yards, and Hernandez scored his second rushing touchdown from 13 yards out.  Mojo scored two more times in the quarter to boost the lead to 49-0 at intermission.  Amarion Garrett had a 3-yard run to paydirt, and Brian Mahaffey crossed the goal line on a 4-yard TD run.

The Black Cats received the second half kickoff, and Chase Stell returned the kick all the way down to the Midland 26.  For the first time in the game, the Bulldogs were able to halt the Panthers from reaching the endzone.  Carson Roberts took the field and nailed a 40-yard field goal.  On the next play from scrimmage, the ball hit the turf and Corey McCoy rambled 20 yards for another Mojo score to extend the lead to 59-0.

Permian’s defense forced another three-and-out.  A rare Mojo miscue in the game gave the ball back to Midland just outside the redzone.  Stell preserved the shutout three plays later, when he picked off an intended pass in the endzone.  The Panthers ran six plays to get close enough for another Roberts field goal of 36 yards to up the tally to 62-0.  Long time-consuming drives, that ended in two punts and a fumble, absorbed the clock in the fourth quarter.

The Mojo defense handed the Bulldogs a negative three yards of total offense.  Hernandez finished the night leading all rushers with 131 yards on 12 carries and two touchdowns.  He also added another 71 yards of passing.  Medlock turned in 48 rushing yards from 10 touches, and scored a touchdown.  Permian’s defense recorded a pair of interceptions, courtesy of Banks and Stell.

The victory secures a playoff spot for the Panthers with two district games to go.  The Panthers (3-0) will travel to Frenship (2-1) next Friday as district action approaches the home stretch.  In other 2-6A games…  Midland Lee (3-0) will host Midland High (0-3), and Odessa High (0-3) will play host to Amarillo Tascosa (1-2).


All game summaries and statistics by Terry Alan.