Skip to content
Odessa, TX — It was a clash of the top two District 2-6A teams as Permian and Midland Lee met at Ratliff Stadium on Friday night.  Picked as 15-point underdogs, the Panthers proved otherwise in a 42-39 decision over the Rebels to close out the district schedule. 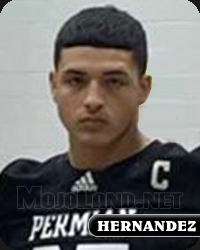 The victory gives the Panthers the top seed in 2-6A and a share of the district title.  It was also the first loss handed to the Rebels this season.  The game’s MVP was Easton Hernandez, who had a hand in five Mojo touchdowns.

Permian went on offense first and ran four plays before having to punt the ball away.  Lee ran all of six plays that covered 73 yards to take a quick 6-0 lead.  Mojo came right back with a 12-play scoring drive of its own, capped off with a trick play and 18-yard touchdown pass from Alex Rose to Hernandez for a 7-6 lead.  That score would hold through a Rebel three-and-out and end of quarter.

The trade of punches between the Panthers and Rebels would continue in the second quarter.  Permian opened the period with a scoring drive that covered 81 yards in five plays.  Hernandez broke loose for a 45-yard scamper.  That led to 26-yard touchdown strike to Terran Limuel.  Lee responded with its own 7-play TD drive, capped off with a 12-yard pass from Mikey Serrano to Shemar Davis.  The Rebels missed both extra point to trail 14-12.

Not to be outdone, the Mojo offense changed tempo and ground out a 65-yard methodical drive that utilized 10 plays and six minutes of clock.  Malachi Medlock completed the effort by bulling his way across the goal line from three yards out.  With time running low in the first half, Lee’s Serrano connected on passes of 39, 24, and 17 yards to setup a one-yard plunge by Karl Taylor to narrow the deficit to 21-18 at the intermission.

The Rebels opened the second half with a 14-play, 81-yard drive that ate five minutes off the clock and gave them their only lead.  A touchdown run of four yards gave Lee a 25-21 edge.  On the next Black Cat possession, Permian faced a third-and-five on its own 40 yard line.  Hernandez took an option play to the house on a 60-yard romp to regain the lead.  After the Mojo defense held the Rebs to four yards on the next set of downs, Hernandez was back in the endzone four plays later to up the Panthers’ lead to 35-25 to close out the third quarter.

The see-saw battle continued in the final 12 minutes.  Lee found paydirt on a short run to cap a 10-play, 74-yard drive.  Permian answered when Hernandez scampered 27 yards for his third rushing touchdown with two minutes and some change remaining.  The Rebels were able to pull to within three points, but Mojo held on for the 42-39 final. 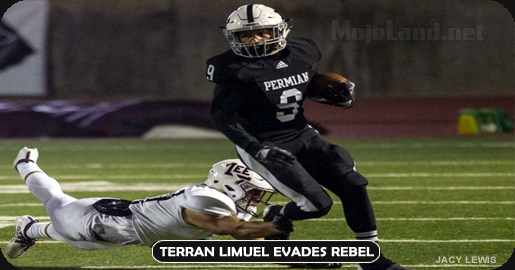 Hernandez led all rushers with 161 yards from 17 carries including three rushing touchdowns.  He also threw a touchdown pass and had one receiving score.  Medlock finished the night with 46 rushing yards on 18 touches.  Amarion Garrett had three catches for 66 yards, while Limuel caught a pair of passes for 46 yards.

The Panthers will host El Paso Franklin next week back here at Ratliff Stadium to open the state playoffs.  Yeah, we remember the last meeting with Franklin in Week 3… bout like the Cougars will remember the upcoming game.