Permian and El Paso Franklin again meet the second game of the season.  Last year, the Panthers made the trip west and claimed a 43-27 victory.  In 2019, Mojo will host the Cougars at Ratliff Stadium on September 5. 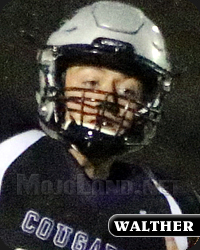 Franklin will return 12 starters in 2019 – six on offense and another six on the defensive side of the ball.  The Cougars were the undefeated District Champions of 1-6A this past season, winning all five district games.  After beating Midland High 77-56 in the Bi-District Round, Franklin was knocked out of the state playoffs the following week by Euless Trinity, 44-28.  The Cougars finished 2018 with a 9-3 record.

AT THE HELM:
Daren Walker returns for a 13th year as Franklin’s head football coach.  He has compiled an 81-42 record as the Cougar leader.  Prior to Franklin, he led El Paso Chapin to a 47-12 mark over six seasons.  Walker’s teams have a tendency rely heavily on the running game.

DEFENSIVELY:
Linebacker David Powers (6’0″  205) led the Cougars last season, and is expected to repeat that performance again in 2019.  He was credited with over 200 tackles as a junior.  Defensive end Andrew Bristol (5’11”  210) will also be a factor on the line of scrimmage.

Jalon Warthen (5’9″  170) logged 63 tackles and two interceptions from his defensive back position.  He has good wheels and pursues the ball well.  Ethan Bustillos (5’8″  155) will be the other impact defensive back.  He contributed 39 tackles of his own last season.  Downside to the Cougar defense is inconsistency.  They got picked apart in several of the games in 2018.