After dominating wins over each of their opening round opponents, Permian and #10 Arlington Martin will square off in the Area Round of the Texas Class 6A Division I playoffs.  The Panthers will host the Warriors this Friday evening at Ratliff Stadium.

Martin finished as the undefeated champions of District 4-6A, but also suffered a 45-38 non-district loss to Rockwall.  The Warriors are celebrating their 17th playoff appearance and are playing one more game than last year.  They were knocked out of the 2018 playoffs in the Bi-District Round.

COMPARISON:
Permian averages 37 points a game, and Martin has a 46-point average. The Mojo defense has given up 24 points per game with a pair of shutouts, while the Warrior defense has limited opponents to 11 points.  They had three shutouts this season. The 4-6A representatives have produced a 350-yard average of total offense (230 rushing and 120 passing). The Panthers have averaged 320 total yards (266 rushing and 54 passing).

AT THE HELM:
Coach Bob Wager began his career at Springfield College where he played as a wishbone running back. In thirteen seasons at Martin, Coach Wager is the school’s all-time leader in victories. Now in his 23rd year as a Head Coach, Wager has compiled a record of 166-91. Prior to the Warriors, he was an assistant at Arlington Sam Houston.  Wager has also been head coach at Tolar, Groveton, and Kaufman.

OFFENSIVELY:
Mojo will see the Martin offense predominately in the shotgun formation.  Junior Zach Mundell (5’9″ 165) is a dual-threat quarterback that has accounted for over 700 yards rushing from 100 carries and 1,200 yards passing, completing 80 out of 140 attempts.  His numbers are slightly lower than Midland Lee’s Mikey Serrano.  He has contributed 32 touchdowns – 16 by ground and 16 through the air, but Mundell has also thrown three interceptions and lost two fumbles.

DEFENSIVELY:
Martin usually lines up in a base 3-4 set.  The Warrior defense has six starters that played on last year’s playoff team.  The linebackers are stout and the guts of this defense. Ed Jones (6’0″ 220), Julian Johnson (5’8″ 200), and junior Morice Blackwell (6’1″ 205) have brought the wood all season.   Blackwell leads the team with 110 tackles, including 12 for a loss and an interception.  Johnson has 103 tackles with five being for a loss, while Jones has logged 71 with 10 tackles for a loss.  Defensive line reinforcements Kenneth Taylor (6’2″ 215) and sophomore Ernest Cooper (6″4″ 220) complete the package.

Martin has a couple of ball hawks in the secondary.  Junior Placide Djungu-Sungu (6’0″ 170) and Christian Traylor (5’10” 175) have five interceptions between the two of them.

SPECIAL TEAMS:
Nicolas Rodriguez handles kicking duties for the Warriors.  He has made 50 out of 53 extra points.  Rodriguez is 10-for-11 in field goal attempts, with a 39-yarder being his longest.  His kickoff average is 56 yards.  Mundell also handles punts and averages 32 yards per boot.  Carter is responsible for punt returns and maintains a 15-yard average. 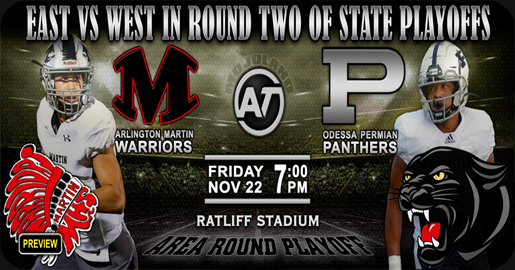 KEYS TO SUCCESS:
Permian will need to morph from its 75 percent run / 25 percent pass offense into a more balanced attack.  Martin’s answer to heavy run offenses has been typically to stack the box with seven and force the opponent out of their comfort zone… and have to pass. The Panthers will need to utilize quick slants and swing passes to keep the Warrior linebackers honest.  Running plays to the outside are favored.

Running a 3-4 set if fine, provided you assign one outside backers to spy on Mundell and the other to keep an eye on the back.  Martin is not a fancy team.  They are pretty straight forward, and will dare you to sit back in zone coverage.  They have exploited that all season by giving Mundell the green light to tuck the ball and run.  Man coverage will yield a good dose of intermediate passes to Robinson.
Key to victory – force Mundell into traps and don’t let him get into a rhythm.