Skip to content
ODESSA — A fourth quarter surge by Team Black earned them a 26-21 victory over Team White in the annual Black-White Spring Game on Thursday evening at Ratliff Stadium. Easton Hernandez threw two touchdowns and ran for another to close out three weeks of drills and workouts. 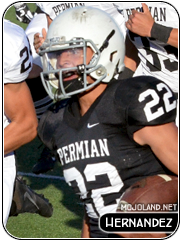 Playing four eight-minute quarters, the Permian varsity was split into two squads – Team Black and Team White. While more than a handful of starters sat out the intrasquad game, the evening was filled with the traditional smash-mouth styled intensity and excitement of Mojo football. Team Black was first on the scoreboard midway into the opening quarter. The scoring drive consisted of a mix of pass and run, which was capped off by a 4-yard TD run by Keshawn Jones.

Team White answered with a pair of touchdowns in the second quarter to take a 14-7 halftime lead. Christian Rodriguez led a five-play scoring drive that covered 70 yards. Garrett Hankins was recipient of a 28-yard TD pass from Rodriguez for the second score to give Team White a seven point lead at the break.

Team White opened the second half with an 11-play drive that ate up most of the third quarter. Mark Samaniego scored on an 18-yard scamper to paydirt to cap off the drive and give Team White a 21-7 lead. From there, Team Black came to life and took over momentum of the game.

Trailing by two touchdowns, Hernandez went to work. Facing a 4th-and-14, the freshman quarterback hit Nakavieon White on a 52-yard strike to keep the drive alive. Three plays later, the two connected for an 18-yard TD reception to cut the deficit to 21-13 with about five minutes at play. The Team Black defense forced a punt and took over on its own 37 yard line. Hernandez broke loose on a 63-yard touchdown run to slice the Team White lead to just two points.

With time running out and less than a minute to play, Team Black was back on offense trying to complete the come-from-behind rally. Making their way down to the Team White 23-yard line, Hernandez found White in the endzone for the game-winning touchdown pass with just 24 ticks remaining on the clock. Team Black held on for the 26-21 victory.