Skip to content
ODESSA — Considered by many as The Authority on Texas high school and college football, the 2019 edition of Dave Campbell’s Texas Football magazine hit store shelves this week. The magazine is projecting Permian to finish third in District 2-6A. 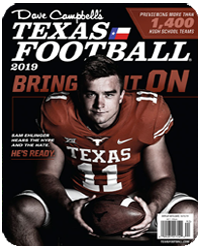 The Lone Star state publication is one of the best-selling football magazines in the state.  It has been dubbed by many over the years as “The Bible of Texas Football”. The magazine rolled out across the state for the first time in 1960.  Currently, it is a twice-yearly publication. At the young age of 93, Dave Campbell still holds the position of editor-in-chief.

According to DCTF, Amarillo Tascosa is picked to win the district.  Midland Lee is favored to fill the second spot.  The magazine placed Permian and Odessa High in third and fourth place respectively.  Frenship and Midland High are expected to compete for the cellar of 2-6A.

Tascosa will return 10 starters – seven on offense and three on defense. The flexbone offense will again be led by quarterback Joseph Plunk. The run-based offense will utilize Parker Settle and Max Burleson out of the backfield.  Midland Lee is returning 14 starters – six on offense and eight on defense. Standout receiver Loic Fouonji will be back in Lee’s offensive assault. The Rebels’ stingy defensive unit stayed intact for another season.

The Panthers will only return five starters – linebacker Teo Banks, lineman Jake Parchman, punter/kicker Carson Roberts, safety Chase Stell, and defensive end KeShawn Wright – from last year’s Class 6A Area Round finalist team. After playing linebacker in 2018, Easton Hernandez returns to his role as signal-caller. Prior to playing on defense, Hernandez utilized his good wheels and strong arm to light up the scoreboard for Permian’s JV Black his sophomore year.

There are other tangibles the magazine may have overlooked. Sophomore running back Malachi Medlock put on quite a show during the Black-White Spring game. Kendyn Armstrong and Dashavion Williams have good hands and field awareness. Both could become immediate impact players at receiver or defensive back.  Roberts returns after being named All-State punter and All-District kicker this past season.

*A disadvantage to analyzing District 2-6A by a Metroplex-based publication might be… We’re Here and You’re Not.   What looks good on paper… doesn’t always materialize on the field come October.