Skip to content
ODESSA — Permian senior Landon Peterson has verbally committed to Texas Tech University and plans to continue his football career in Lubbock. The 6’6″, 265 pound offensive lineman gave his verbal pledge to the Red Raiders on December 10. 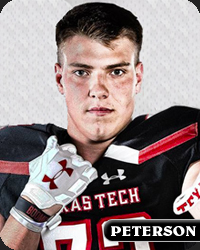 The three-day early official signing period starts on December 19, and the national signing day is February 6. Verbally commits are not binding until these dates and agreements are signed on paper.

Peterson is rated as a strong three-star prospect who is ranked No. 71 nationally among 2019 offensive tackles and No. 100 overall regardless of position in the state of Texas for his class. He is expected to remain on the offensive line when he dons the red and black.