Skip to content
Odessa, TX — Permian took advantage of being back in the state playoffs by defeating Mansfield Summit 45-31 in the 2006 5A Bi-District game at Ratliff Stadium. 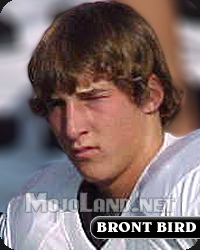 The last playoff game a Permian team competed in was back in 1998 at Texas Stadium against Duncanville in the state Quarterfinals.  That seven consecutive year playoff drought was the longest in school history.  After today’s win, that streak can be put to rest.  Second-year head coach Darren Allman himself was a defensive starter on the 1985 Mojo state finalist team.

The Panthers scored six touchdowns from five different players in their state playoff return.  Bront Bird had two touchdown catches and 96 yards receiving, while Shaquay Gant led all rushers with 127 yards and a touchdown from 16 carries.

Permian’s return got off to somewhat of a rocky start.  On the second play of the game, Tate Smith threw an interception to set the Jaguars up at the Mojo 33.  The defense went to work immediately and were able to force Summit to settle with a 36-yard field goal.  After an exchange of punts, Nick McFall gave the Panthers great field position on a 44-yard punt return.  A 5-play, 36-yard scoring drive was capped off with an 18-yard touchdown pass from Smith to Lavorick Williams to give the Black Cats a 7-3 first quarter lead.

After Robert Murry reeled off a 20-yard TD run in the second quarter, Summit dealt with more of Mojo’s stingy defense.  Cori Branscum forced and recovered a fumble near midfield.  Seven plays later, Smith connected with Melvis Pride on a 27-yard strike to up the tally to 21-3.  Quarterback John Chiles, a UT Longhorn commit, had a pass picked off and Murry returned it 59 yards to the Summit 18.  With time running out on the first half, the Panthers settled with a 25-yard Michael McNatt field goal to enjoy a 24-3 lead at intermission.

It became an all out brawl in the second half, particularly in the third quarter.  Summit took the opening kickoff and returned it to midfield.  Chiles finished off a 7-play drive with a 9-yard TD run to cut the deficit to 24-10.  Gant responded with a 60-yard catch-and-run, and Bird hauled in a 35-yard pass to extend the Mojo lead back to 21 points.  Back came the Jaguars with an 8-play scoring effort midway in the period.  Two plays later, Summit recorded a pick-6 from 40 yards out.  In less than a quarter, the Jaguars got to within striking distance at 31-24.  Not to be outdone, Bird and Smith got together for another touchdown to end the quarter.

The Jaguars, now trailing 38-24 to start the final 12 minutes, drove the length of the field and was knocking at the door on the Mojo 2-yard line.  On the next play, Austin Shaffer stripped the ball loose and Andrew Amoyaw recovered to snuff out the threat.  Three plays later, Gant exploded through the middle of the line and scampered 89 yards to paydirt.  Summit scored one more time late in the game, but the Panthers will continue in the playoffs with a 45-31 victory.

Permian will now host San Angelo Central in the Area Round of the state playoffs next Saturday at 2:00 back here at Ratliff Stadium.  The former district opponent squeaked by El Paso Montwood 14-12 in their Bi-District game.