Skip to content
ODESSA — Permian played host to the International School of Broward Pumas as the Panthers celebrated Homecoming.  After dominating the first half and cruising to a 56-0 lead, Mojo finished the night with a 70-8 non-district victory at Ratliff Stadium. 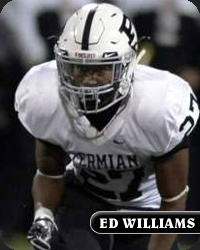 Senior running back Ed Williams finished the game with three touchdowns, while rushing for 168 yards.  Permian scored on every possession of the game up until the final series of downs ran by secondary offensive personnel.

The Panthers went on offense first and took just three plays to start the slaughter.  Alex Rose scored from seven yards out, but it wasn’t just a night of offense.  The Mojo defense forced the Pumas to a three-and-out.  On fourth down, Tanner Adams got into the backfield and blocked the punt.  Andy Notley came up the ball for a quick 14-0 lead.  On the ensuing kickoff, the pooch kick was recovered by Kaden Horrell to set up Permian on the Broward 32.  Four plays later, Justin Hammond coasted into the endzone.

The Pumas were again forced to punt after three plays.  Broward was able to get the punt off, but it only traveled 23 yards to their own 45.  The next play from scrimmage witnessed Williams bust free for the 45-yard touchdown.  On the next Mojo offensive series, Horrell capped off a five-play, 41-yard scoring drive with a 14-yard scamper to put the Panthers up 35-0.

Most of the game was played on the ISB end of the field.  That held true in the second quarter.  Williams crossed the goal line early in quarter to cap a seven play scoring drive.  After Chase Stell intercepted a pass at the Puma 18, Hammond found paydirt on a 13-yard trot.  Williams collected his third touchdown midway in the quarter.  The Mojo defense held the Floridians to negative total yards and no first downs at the intermission.

What would be Homecoming night without Queen?  Chloe Rivera was crowned during the halftime festivities.

Visiting woes continued for Broward.  After receiving the second half kickoff, another three-and-out was followed by a punt that went straight up and came down at the 1-yard line.  Devon Hinojos collected the loose ball and stepped into the endzone for another Mojo score.  The Pumas got their first first down on the next possession, but turned the ball over on downs.  Permian took advantage of the field position, and Rose scored his second TD on a 11-yard run to make it a 70-0 ballgame.  The tally ties the school record for most points scored in a single game.  The 2015 Panthers slapped 70 points on McAllen.

The International School of Broward was able to erase the lopsided shutout early in the final 12 minutes of play.  The Pumas put together a 9-play, 75-yard scoring drive and successfully converted the two-point attempt.  The Broward defense had a positive to take from the contest… the fourth quarter failed to see Permian add any points.