Skip to content
ODESSA — Permian senior Matt Jones has verbally committed to Baylor University and plans to continue his football career in Waco.  The 6’3″, 230 pound linebacker gave his verbal pledge to Baylor on June 22. 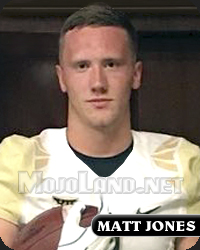 Rated the 183rd best recruit in the state of Texas, Jones chose the Bears over offers from Texas Tech, Illinois, Nevada, Southern Illinois, and Texas State. The three-day early official signing period starts on December 19, and the national signing day is February 6.

Baylor will more than likely be looking at Jones as a rush end, playing their weak-side linebacker position.  It is a role he played quite a bit during his junior year for Permian.  He has the physical frame and athletic ability that the Baylor coaching staff are looking for in a rush end candidate.

Mojo’s Jones will slot the same position in the Baylor defense that was formerly occupied by Brian Nance and currently Xavier Jones.