Skip to content
Odessa, TX — Trailing by 14 points at the half, Permian scored 21 points in the fourth quarter to tie Arlington High at Texas Stadium.  The Panthers advance in the 1987 state playoffs on tie-breaking first downs. 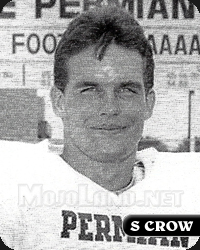 With momentum squarely on their side and the clock down to under two minutes, the Black Cats knew penetrations were tied.  From the 3-yard line, Shawn Crow dragged two defenders into the endzone to make it a 35-33 ballgame.  Crow came right back and bulled his way across the goal line for the two-point conversion.  The Colts had experienced Mojo Magic and Permian advances by virtue of 22 first downs to Arlington’s 20.

On the only scoring drive of the first quarter, the Colts faced a 3rd-and-1 at the PHS 10.  John Wilson took an option play down to the 3-yard line.  Two plays later, he was in the endzone for a 7-0 Arlington lead.  While the Permian offense struggled to mount any serious threat, the Metroplex ponies continued their dominance into the second quarter.  Wilson scored from 13 yards out on the next possession for a 14-0 lead.

The Panthers finally found some success midway into the quarter.  Permian put together its own scoring drive, that covered 87 yards. Crow gave Mojo a big boost with a 39-yard scamper down to the Arlington 23. Four plays of Permian moving backwards was rectified when Lloyd Hill made a diving 30-yard catch to give the Panthers a 1st-and-goal at the 1.  Crow reached paydirt on the next play.  The Colts scored again on an 11-yard TD pass as time ran out on the first half.  Permian trailed 21-7, but the second-half team was about to show they still had some fight left in them.

After an exchange of big plays, the Panthers still needed to make-up the 14 point difference.  Wilson broke out on a 46-yard touchdown run for the Colts.  Permian answered with a scoring drive of its own, capped off by a 14-yard romp by James Miles.

Things heated up in the game’s final 12 minutes. Holding a 28-21 lead, Arlington decided to go for a first down on 4th-and-1 from its own 46-yard line. A naked bootleg was smothered by Mike Cox and Kyle Hooper for a 3-yard loss and turnover of downs. It took Crow five plays to get his third touchdown to pull the Panthers to within a point.  Officials met and confirmed both teams had four penetrations and Permian led by two first downs.

The Colts received the ensuing kickoff and got out to the 34.  Wasting no time, Arlington extended their lead to 35-27 on a 49-yard bomb with 4: 12 to play.  After the kickoff, the Mojo offense produced a well executed 76-yard scoring drive that ended with a 3-yard touchdown run by Crow with 2:51 remaining.

Full of adrenaline, the Permian defense was up for the task.  On the final play of the game, Arlington’s quarterback released a hurried pass that landed into the waiting arms of Art Wagner.  The Panthers erased a 14-point deficit they faced to begin the fourth quarter. and were advancing in the state playoffs.

Crow finished the game with 22 carries for 159 yards rushing and four touchdowns.  He also had two receptions for another 33 yards, while Hill hauled in three catches for 49 yards.  Mike Winchell completed half of his passes (6-for-12) to account for 71 yards through the air.  Miles added 48 yards from 12 carries. 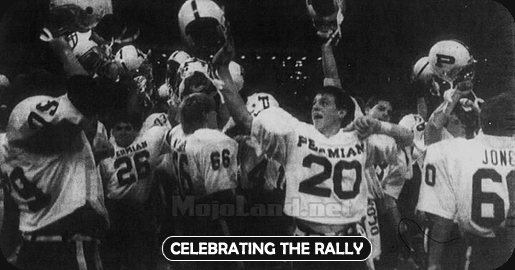