Skip to content
Lubbock, TX — Permian is heading back to the state finals after defeating #1 state-ranked Longview 10-9 in the Class 4A Semifinals on a windy Saturday night in Jones Stadium.  Russell Wheatley kicked his way into the Texas high school record book with a 62-yard field goal that helped in the Mojo victory. 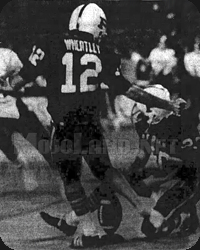 The Panthers entered the contest as underdogs, but you’d have never known that by watching the defensive play.  Longview’s Leo McCoy, a 1,000-yard rusher, was held to 23 yards in the first half.

After an exchange of downs, Curtis Pittman connected with Ricky Ross to get the Permian offense to midfield.  The Lobo defense backed the Panthers up on consecutive plays to force a 4th-and-26 on the Mojo 46.  Wheatley trotted onto the field minus one shoe.  The barefooted kicker split the uprights with the record breaking field goal for the only points scored in the first half.

Longview was able to tie the game early in the fourth quarter.  A fumbled punt return was recovered by the Lobos at the Permian 15.  The defense again flexed its muscle and Longview had to settle with a 28-yard field goal and 3-3 tie.  Another Mojo miscue came on the ensuing possession.  Pittman’s pass was intercepted and returned 57 yards to the Panthers 7-yard line.  The Lobos broke the tie when they got into the endzone on a short run on 4th-and-Goal for a 9-3 lead.  A missed extra point that went wide right would come back to haunt them.

Ball control, clock management, defensive battles in the trenches, and each team having an unproductive set of downs set up the climatic game-winning drive for Permian.  A hurried 18-yard punt gave the Panthers great field position at the Lobo 36.  Kris Howard took over under center and immediately went to work.  He hit Ross in stride for a 35-yard strike down to the Longview 1-yard line.  Johnny Houser found the endzone on an off-tackle plunge to tie the game.  Wheatley nailed the extra point and Mojo was back on top, 10-9.

With under three minutes left in regulation, Longview had once last chance.  However, the Mojo defense was prepared to finish the task at hand.  Down to 45 ticks on the game clock, Brad Brown stepped in front of a Lobo pass for the game securing interception at the 34-yard line.

With the victory, the Panthers will now prepare for a shot at the Class 4A State Championship title.  Permian will play Port Neches-Groves at a yet to be determined site.  The Indians won their Semifinal game 28-0 over San Antonio Lee.