Skip to content
Odessa, TX — It was a day of unity – a day to start the healing process between two communities dealing with tragedy. The 2019 season home opener for Permian left more questions than provide answers in a 49-28 loss to El Paso Franklin on Thursday night. 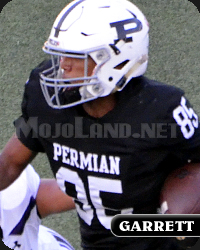 The Panthers went on offense first and ran seven plays, including the game’s first first down, before punting the ball away.  It took all of three minutes for the Cougars to roll 80 yards in 10 plays for a quick 7-0 lead.  Following the ensuing kickoff, the Permian offense took over at the 26-yard line.  On the first play from scrimmage, Harper Terry connected with Amarion Garrett near field.  The junior receiver swatted off a pair of defenders and made his way into the endzone to knot the game at 7-7.

The Franklin offense went back on the attack.  The second Cougar drive covered 75 yards and was capped off by quarterback Danny Walther’s touchdown run from 10 yards out.  The Panthers answered with a promising drive that made its way into El Paso territory.  The effort stalled and a missed 32-yard field goal attempt left Permian trailing 14-7 at the end of the first period.

The Cougars chewed up five minutes of second quarter clock with another 80-yard scoring drive, consisting of nine pass plays and a couple of runs to extend their lead to 14 points.  Each team traded jabs with an exchange of 4-play scoring drives.  The Panthers had to settle with a 28-14 deficit at the half.

Franklin continued the aerial assault to open the third quarter.  An 8-play, 75-yard scoring drive was answered by Permian’s 5-play, 39-yard touchdown drive.  By the end of the quarter, the Panthers were behind 35-21 with only 12 minute to make up the difference.

Permian added seven points in the fourth quarter on a Terry-to-Neri Carrasco 27-yard TD pass.  The Cougars scored twice in the final period to hold onto their lead and claim a 49-28 non-district win over the Panthers.  Terry finished the night completing half his passing attempts (12-of-24) for 200 yards.  He also had 51 yards rushing.  Nate Arredondo added another 30 ground yards.  Garrett had the hot hand and racked up 119 receiving yards from five catches, while Carrasco had three receptions for 55 yards.

Permian will now turn its attention to the ‘Friday the 13th’ clash with Metroplex powerhouse Southlake Carroll.  The Dragons are known for slinging the rock, so there’s work to be done the next eight days.  Kickoff for Black Cat Friday will be at 7:00 p.m. at Ratliff Stadium.