Skip to content
DeSoto, TX — The Eagles wasted no time unleashing their potent offense on the Panthers in the season opener at Eagle Stadium.  Permian fell behind 21-7 in the first quarter.  Mojo was able to match DeSoto the remainder of the game, but came up short 35-14 in the non-district clash. 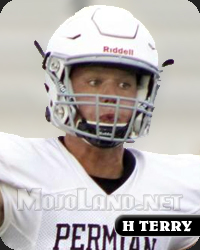 The Eagles took advantage of running the fast-paced no-huddle offense from the very first kickoff.  DeSoto’s opening drive covered 74 yards in nine plays.  Permian, on the other hand, shot themselves in the foot on the next snap of the ball.  Starting their first possession on the 28-yard line, a bobbled hand-off hit the turf and was scooped up and taken into the endzone by DeSoto’s Byron Murphy.  The Panthers in less than a four minute span now trailed 14-0.

On the next set of downs, Permian was again forced into a three-and-out.  Carson Roberts’ high-hanging punt spiraled 49 yards down the field.  Mojo caught a break when the receiver fumbled the ball on the 25-yard line.  Facing a 4th-and-four on the DeSoto 18, Alex Rose took a reverse to the house to cut the deficit to seven.  The Eagles answered with a 40-yard strike from junior quarterback Samari Collier to Jordan Brown to cap a 4-play, 76-yard scoring drive to take a 21-7 lead late in the opening quarter.

DeSoto chewed up a lot of clock in the second quarter with a long 94 yard drive.  A pair of holding calls was the only blemish on the 15-play drive.  DeMarcus Jackson crossed the goal line from three yards out to give the Eagles a comfortable 28-7 lead.  After Roberts boomed out a 50-yard punt, DeSoto coughed up the ball four plays later.  Manny Ramirez punched the ball loose for the Panthers to start at the 35-yard line.  Permian was unable to convert the miscue and went into the locker room down by 21.

Permian got the ball to start the second half, but the possession only included three plays and a punt.  The Mojo defense returned the favor and the Eagles had to give the ball right back.  The Panthers showed some life on the next set of downs and got as far as the DeSoto 32.  On a 4th-and-13, the intended pass fell incomplete.  Another exchange of punts absorbed the remaining time out of the third quarter.

The Black Cats squandered another scoring opportunity midway in the final stanza.  Taking over on its own 5-yard line, Permian picked up a first down and Malachi Medlock uncorked a 41-yard scamper into Eagle territory.  Three short yardage plays and a failed fourth down attempt had the drive stall just inside the DeSoto 40.  It took seven plays before the Eagles scored on a short TD pass late in the game.

The Panthers were able to score once more as time was running out.  Harper Terry reeled off a 49-yard touchdown run to save face on a rough season opening night as Permian suffered the 35-14 road loss.  Medlock finished the night with 131 yards rushing on 13 carries.  Terry had 12 touches for 97 yards and a touchdown.  Rose was limited to 15 yards and a score.