Skip to content
Wolfforth, TX — Permian ventured north to the South Plains for a District 2-6A showdown with the Frenship Tigers.  After falling behind 24-3 at the half, the Panthers were unable to make up the deficit in a 24-13 loss at Peoples Bank Stadium. 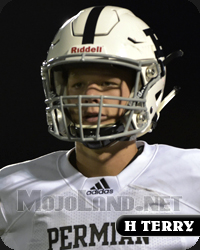 The Black Cats suffered their first district loss of 2019.  And while the Mojo defense kept the Panthers in the game, the one-dimensional offensive approach failed to match-up against a well-prepared Frenship defense.  The Tigers stacked the box for most of the night, daring Permian to throw the ball.  It just didn’t happen as the offense continued to rely on the running game.  Overall, the game seemed to have resemblances of the DeSoto trip.

Permian went on offense first.  Three running plays and a punt followed, giving  Frenship the ball at their own 44.  Six plays later, quarterback Donovan Smith rambled in from 29 yards out for a 7-0 Tiger lead.  On the ensuing set of downs, the Panthers put together a decent drive but failed to convert a 4th-and-1 on the Frenship 39.  The Tigers took over and a field goal capped off an 11-play drive for a 10-0 first quarter lead.

Carson Roberts continued his clutch role and got the Black Cats on the board early in the second quarter.  Taking over on the 25-yard line, Permian moved down the field but the drive stalled just outside the redzone.  Roberts cut the deficit to a touchdown with his 34-yard field goal.  The Tigers almost duplicated the Panthers’ possession, but missed their field goal attempt to leave the score at 10-3.  The Permian offense ran two plays on the next series before a Harper Terry pass was deflected, intercepted, and returned to the 1-yard line.  From there, Smith called his own number and went unblemished across the goal line.  After a three-and-out by the Panthers, Smith threw a 45-yard TD strike to give Frenship a 24-3 halftime lead.

Each team chewed up game clock in the third frame as the Panthers and Tigers would each have one possession in the quarter.  Frenship went on offense first.  The Mojo defense looked to start the second half with a three-and-out, but a 15-yard personal foul penalty gave the Tigers new life at the 40.  Frenship reeled off 10 plays and threatened inside the Permian redzone.  Smith fired an ill-advised pass into traffic and Chase Stell nabbed the pass to squash the scoring attempt.  The Black Cats took over and methodically dished out a heavy dose of Malachi Medlock.  The drive unfortunately ran out of juice and Roberts was again called upon to boot 33-yard field goal late in the third stanza.

Mojo collected its lone touchdown of the game midway in the final quarter.  Taking over deep in their own end of the field, the Panthers worked past midfield.  Terry tossed a shovel pass to Terran Limuel, who pin-balled his way 42 yards to paydirt with six minutes to play.  Frenship sat on the 24-13 lead, and Permian was unable to get any closer. 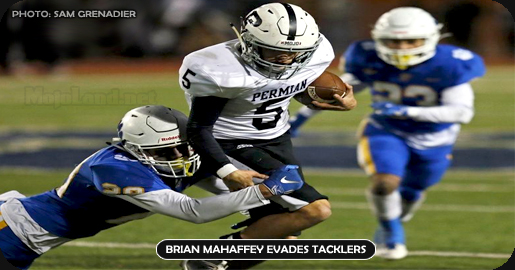 Medlock led all rushers with 106 yards from 22 carries.  Limuel rushed for 36 yards and had the one reception for another 42 and the team’s only touchdown.   Easton Hernandez had seven touches for 48 yards before exiting the game with an undisclosed injury.  Heading into the final game of the District 2-6A schedule, Permian (3-1) will host Midland Lee (4-0) at Ratliff Stadium.  A full house is expected and kickoff is at 7:30 p.m.