Skip to content
Odessa, TX — Friday night’s Revenge at Ratliff featured El Paso Franklin and Permian.  The first meeting between the two teams ended in a 49-28 non-district win for the Cougars.  This time around, the Panthers flipped the script and rambled to a 48-13 Bi-District victory in Class 6A Division I. 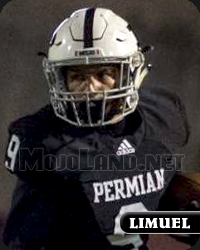 With the successful outcome, Permian will advance to the Area Round of the state playoffs.  Easton Hernandez turned in a three TD performance for the second consecutive week.

Franklin went on offense first and looked on track to draw first blood.  The Mojo defense was to have no part of it and denied the Cougars on a 4th-and-14.  Permian took over at their own 20.  The Black Cats answered with an 11-play, 80-yard drive, with Terran Limuel punching the ball in for a 7-0 lead.  Franklin tied the game seven plays later to knot the game as time ran out on the first quarter.

The Panthers turned on the juice in the second frame.  Hernandez started the slaughter by capping off a 9-play scoring drive to give Mojo a lead they would never relinquish.  After forcing the Cougars into a three-and-out, it was Alex Rose’s turn to add to the lead.  Reaching paydirt on a 21-yard scamper, Rose finished off the drive that covered 90 yards in just six plays.  On the next set of downs, Franklin made its way to the Permian 32 only to be once again turned away.  The Black Cats went back on the offensive, and Hernandez found his way across the goal line to extend the lead to 28-7 at the intermission.

Permian received the second half kickoff and went right back to work.  Hernandez scored his third touchdown of the game on a drive that covered 84 yards in nine plays.  Carson Roberts added a 35-yard field goal late in the quarter to give the Panthers a comfortable 38-7 lead.

The Cougars tried to get back in the game on the opening drive of the fourth quarter.  Franklin made it way down to the Permian 21.  Facing a 4th-and-11, the quarterback threw an interception to Chase Stell who snuffed out the scoring threat.  Mojo took over and it took all of three plays before Brian Mahaffey unleashed a 65-yard touchdown run.  El Paso got into the endzone on the series of downs, but it was too little, too late.  Roberts tacked on the final three points to give Permian the 48-13 victory.

Hernandez led all rushers with 160 yards off of 16 carries and three touchdowns.  Malachi Medlock had 15 touches for 112 yards, while Limuel followed with 109 yards on six carries and a touchdown run.  Alex Rose added another 85 yards rushing.  The Mojo defense held the Cougars to 58 ground yards.  Stell also had the game’s lone interception.

The Panthers will host Arlington Martin next Friday evening in the Area Round of the state playoffs.  The game will be played back here at Ratliff Stadium with a 7:00 p.m. kickoff.