While Friday night will kickoff the opening round of the 2019 Class 6A Division I state playoffs, it will be the second meeting between El Paso Franklin and Permian this season.  It’s been two months since the Cougars’ non-district win over the Panthers.  This time around, the stakes are just a little bit higher. 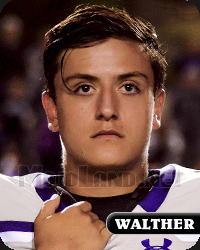 COMPARISON:
Permian averages 36 points a game, while Franklin has recorded a 40-point average. The Mojo defense has given up 25 points per game, and the Cougar defense has limited opponents to 17. The El Paso representatives run a somewhat balanced offense. They have produced a 492-yard average of total offense (274 rushing and 218 passing). The Panthers have averaged 351 total yards (242 rushing and 109 passing).

AT THE HELM:
Daren Walker is in his 13th year as Franklin’s head football coach.  He has compiled an 89-44 record as the Cougar leader.  Prior to Franklin, he led El Paso Chapin to a 47-12 mark over six seasons.  Walker has a tendency to lean on the run game. The past two seasons, he has had the luxury of being able to call a more balanced game.  That would be largely due to his field general Danny Walther.

OFFENSIVELY:
The Mojo defense will again see the spread offense. Two-time all-district quarterback Walther (5’11” 170) has accounted for over 700 yards rushing and 2,100 yards passing this season.  He has scored 30 touchdowns – seven by ground and 23 through the air, but also has thrown nine interceptions.

Walther is joined in the backfield by Pablo Payan (5’8″ 160). The senior running back has 99 carries for 631 yards.  He averages 6.4 yards an attempt and 63 yards a game.  Erwin Sutton (5’9″ 150) has 821 yards from 67 touches.  He’s been averaging 12 yards a carry.  Both backs will occasionally drift out of the backfield but usually as decoys.  The pair have only accounted for 10 catches combined the whole season.

DEFENSIVELY:
Franklin returned six starters on defense at the start the season.  Five are still contributing plenty of experience.   Linebacker David Powers (6’0″ 205) has led the Cougar defense for two seasons.  He has 104 tackles this year and has recorded 17 for a loss, as well as nine hurried passes.  Completing the interior guard is sophomore Steven Powers (5’10” 175) and senior Will Garcia (5’10” 195).  Powers has 74 tackles and nine were for a loss, while Garcia has 65 and 10 of his were for a loss.

Franklin will bring the heat up front with the size to back it up.  Junior James Apsey (6’1″ 270) and Chance Scott (5’10” 265) line up as defensive tackles and get after it.  Apsey has 62 tackles, three sacks, and 15 hurries. Scott has recorded six sacks and seven hurries.  The Panthers will also see junior Julian Dorsett (6’1″ 185) on the outside.  His quickness has allowed him to log 64 tackles (nine for a loss) and 26 hurries.  If a delayed blitz is called, more than likely it will be Dorsett coming from around the end.

The Cougars have a couple of good ones in the secondary.  Sophomore Josh Massaquoi (5’11” 175) has two interceptions with big play abilities.  He had seven deflected passes during the district run.  Ethan Bustillos (5’10” 165) will be the other impact defensive back.   He has contributed 27 tackles, an interception, and has blocked two field goals.

SPECIAL TEAMS:
Taj Westrick handles kicking duties for the Cougars.  He has made 48 out of 51 extra points.  Westrick is 2-for-2 in field goal attempts, but his longest is only a 29-yarder.  Franklin has a tendency to opt on trying to convert fourth downs, as opposed to field goal attempts.  Punter Adam Yero averages 35 yards per boot.  Haack and Bustillos have been responsible for punt and kick returns, and average moving the ball forward 22 yards.