Skip to content
EL PASO — After battling to a 14-14 tie at halftime, Permian put the Franklin Cougars away in the second half to cruise to a 43-27 victory. The Panthers improve to 1-1 for the year after the non-district win on Friday night at Franklin Stadium. 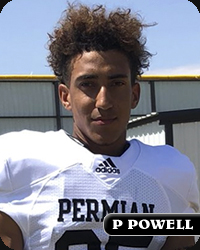 Mojo racked up over 500 yards of offense for the night.  Ed Williams churned out 201 rushing yards, followed by Peyton Powell (86 yards), Kaden Horrell (67 yards), and Justin Hammond (58 yards).  Powell had a touchdown run of 58 yards and threw two TD passes to Hammond, who finished with seven catches for 147 receiving yards.  Production in the second half proved to be the difference in the road win.

Permian won the coin toss and deferred, giving Franklin the ball first. The Cougars went right to work and scored on an 8-play, 59-yard drive that was capped off with a 29-yard TD pass on fourth down. The Panthers answered in just two plays with Powell reeling off a 58-yarder to paydirt. On Franklin’s next possession, Keatyn Armstrong intercepted a pass at the Mojo 19 to snuff out the Cougar scoring threat.  The Permian offense ran 12 plays on the final drive of the first quarter, but the possession was marred with holding penalties.  The Panthers came away without point and turning the ball over on downs.

A second miscue by the Cougars led to Mojo taking its first lead early in the second quarter.  Christian Tschauner picked off a pass to give Permian the ball at the Franklin 38.  Six plays later, Williams plunged into the endzone on a short TD run.  The Cougars came back on the next play from scrimmage with a 79-yard TD run by Taj Crenshaw to knot the game at 14-14.  The Panthers coughed up the ensuing kickoff, but Franklin was unable to take advantage of it.  The Cougars committed their third miscue when Tanner Adams stepped in front of an attempted pass for an interception inside the redzone.

Hammond went coast-to-coast to open the second half with a 100-yard kickoff return. After Hammond’s touchdown return, the Permian defense flexed it muscle, forcing Franklin to back-to-back 3-&-out possessions. Powell-to-Hammond on an 11-yard TD strike gave Permian a 28-14 lead midway in the third stanza.  Crenshaw got into the endzone on a 4-yard run late in the quarter, but the Panthers blocked the PAT and Tschauner took it to the house for two points and a 30-20 Mojo lead.

Powell-to-Hammond chalked up another score as the fourth quarter got underway. It took all of four plays before the pair connected on a 37-yard touchdown. The Cougars tried to keep it close and scored on a 22-yard QB keeper midway into the final quarter. The Panthers chewed up four minutes of clock on the next possession. Williams capped off the 8-play drive when he bulled his way across the goal line for the final score of the game.

Franklin faced trailing by two possessions and time running out, but continued to fight.  The Cougars put together an 11-play drive that covered 61 yards. Again, the Mojo defense denied the Franklin threat. Permian took over on their own 9 yard line and ran out the remaining time on the clock.

The Panthers will travel to the Metroplex next week to play Southlake Carroll in another non-district clash.