Skip to content
ODESSA — After coming into the contest somewhat flat, Permian finally came to life to hand Frenship a 38-10 district loss on Senior Night at Ratliff Stadium.  The victory for the Panthers sets up the much anticipated District 2-6A finale with Midland Lee at Grande Stadium on November 9. 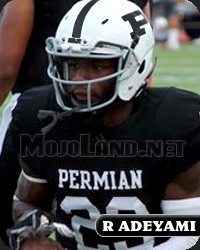 While Christian Tschauner, Chase Stell, and Rakeeb Adeyami enforced the Mojo ‘No Fly Zone‘, Ed Williams led the offense with three touchdowns and another 100-yard rushing game.  Tschauner and Stell each hauled in an interception.

The Panthers started the game on offense and was able to collect a first down before fumbling on the opening possession.  Frenship took over at the Mojo 43.  A 29-yard pass on fourth-and-six kept the threat alive, but the Permian defense rose up and forced a 22-yard field goal by Cage Jones to give the Tigers a 3-0 lead.

On the next set of downs, Permian answered with a long, sustaining 95-yard, 18-play scoring drive.  A drive that was capped off by Williams from two yards out.  The Tigers temporarily regained the lead when Jake Sherrard hit Evan Barbosa on a 14-yard pass into the endzone.  The 9-play drive gave Frenship a 10-7 advantage midway into the second quarter.

From there, Mojo went to work and took over the game.  First, Justin Hammond scored on a 17-yard scamper.  On the next possession, Tschauner intercepted a Sherrard pass and returned it to the 35-yard line.  Six plays later, Christian Rodriguez and Kaden Horrell connected on a 14-yard scoring strike to give the Panthers a 21-10 halftime lead.

Frenship received the second half kickoff and got as far as midfield before the Mojo defense snuffed out a 4th-and-5 attempt to take over at the 47.  Permian drove down into the Tigers’ redzone.  Facing a 4th-and-Goal, Williams bulled his way into the endzone for his second touchdown of the game to extend the PHS lead to 28-10.

As the third quarter neared completion, the Tigers’ Jones blasted out a 73-yard punt to pin the Panthers on their own 3-yard line.  Permian maneuvered its way out of the danger zone in six plays to setup shop at the Frenship 48.  Rodriguez uncorked a 46-yard bomb to Mason Sellers, which was followed by Williams crossing the goal line for his third TD run from two yards out early in the final period.  Roberts nailed a 26-yarder late in the quarter to seal the 38-10 victory.

Rodriguez completed five of his eight passes for 109 yards and rushed for another 49.  Horrell finished the night with 65 yards rushing and 14 more by air, while Hammond had 64 rushing yards and 19 receiving yards.  Sellers caught two passes for 71 yards.

With the victory, Permian clinches no worse than a share of the District 2-6A title.  A win over the Rebels next week will solidify sole possession of the district’s top spot for 2018.  The Panthers have also secured the No. 1 seed in the Division I (Big School) state playoff bracket.  Mojo will host the Bi-District game (versus an El Paso team) at Ratliff Stadium in two weeks.