Skip to content
ODESSA — Permian punched the post-season ticket after haunting Midland High 34-7 at Ratliff Stadium on Friday night.  While the Panthers extended the 21-7 halftime lead, the Mojo defense was responsible for an impressive four interceptions and a fumble recovery. 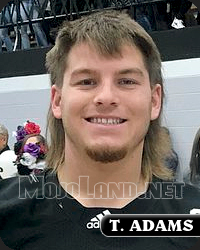 The Panthers jumped out to a quick 14-0 lead, scoring on their first two possessions.  Ed Williams ripped off a 36-yard TD run, and then came back with a 64-yarder on the next series of downs.  Midland had a chance to add three points in the opening frame, but missed a 36-yard field goal attempt.

The second quarter was marred with two fumbles by Permian.  The second miscue led to the Bulldogs scoring their only points of the game on a short touchdown run by quarterback Suddin Sapien.  Mojo’s Kaden Horrell hauled in a 37-yard pass to give the Panthers a 21-7 halftime lead.

Midland High received the second half kickoff but was unable to do anything with it.  Permian came back with a long sustaining drive, capped off with a Horrell 3-yard TD run.  It was his second touchdown of the game.  The Black Cats led 28-7 as the third quarter came to an end.

In the final 12 minutes of play, each team had two possessions with Mojo adding the game’s last six points with under four minutes to play.  Tyler Ramage did the damage on a 5-yard touchdown reception from Christian Rodriguez to secure the 34-7 district win.

Williams finished the night with two rushing touchdowns and 237 yards on 22 carries.  Horrell rushed for a touchdown, while adding 58 receiving yards and the TD catch.  Justin Hammond had five carries for 44 yards.

The Panthers improve to 6-2 on the season and 3-0 in district play. Permian will host Frenship next Friday back here at Ratliff Stadium.  Mojo is two wins away from owning the district bell and adding a gold ball to the trophy case.