Skip to content
ABILENE — After falling behind 21-7, Permian battled back in the second half to take a touchdown lead.  Arlington Lamar reclaimed the lead late in the game to take a 49-35 victory away from Mojo in the Area Round of the Class 6A Division I state playoffs at Wildcat Stadium on the campus of Abilene Christian University. 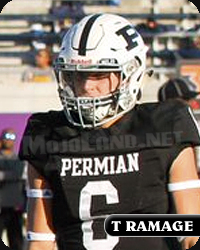 Justin Hammond accounted for three of the Panthers’ touchdowns.  He finished the game with 106 yards rushing and 81 yards from seven receptions.  Ed Williams had 103 rushing yards, while Tyler Ramage finished with 34 yards on two catches.  Despite the score, the Mojo “No Fly Zone” defense added three interceptions to their 2018 resume.  Chase Stell, Tanner Adams, and Christian Tschauner each came up a pick during the afternoon slugfest.  Matt Jones also blocked a punt that set up a Permian touchdown.

The Vikings’ three TD bookends was just too much to overcome.  Lamar converted two Mojo miscues into points in the first quarter.   Their opening drive covered 78 yards and was capped by a 23-yard touchdown pass from Jack Dawson to Isaiah Neyor.  The pair connected on another score with a 12-yarder.  After Permian’s first drive that consisted of a first down and punt, Stell picked off a pass to give the Panthers a second chance.  Two plays later, a mishandled handoff hit the turf and Lamar came up with the ball on the 38.   That would result in a 30-yard TD run by Dawson.  Miscues continued to plague Mojo as they coughed up the ball on the next possession.  The Vikings converted that into a 21-0 lead.

Permian’s offense finally got on track early in the second quarter. Mojo advanced the ball down to the Vikes’ 9-yard line, but came away short of points.   The defense forced a three-and-out to give the Panthers a fresh set of downs at midfield.  A six-play drive was capped off by a 15-yard scamper by Hammond to cut into the Lamar lead to trail 21-7 at the half.

The third quarter started with both teams trading punts, but the Panthers seized the moment when Jones blocked the Vikings punt to setup Mojo on the 33-yard line.  It took all of four plays for Kaden Horrell to cross the goal line from five yards out to make it a 21-14 ballgame.

Lamar re-established their two touchdown lead with an 11-play, 72-yard scoring drive that ended with a 7-yard TD pass late in the quarter.  Hammond answered with a 67-yard run and followed it with an eight yard touchdown reception to pull the Permian back to within seven at 28-21.  Adams picked off a Viking pass at the 36, and the Mojo offense ran three plays to setup shop at the Lamar 16 as the third quarter came to an end.

On the second play of the fourth quarter, Hammond hauled in a 16-yard pass from Christian Rodriguez and the game was deadlocked at 28-28.  The Lamar offense reeled off six plays on the ensuing drive to get into the Mojo redzone.  An attempted pass just outside the goal line was gobbled up by Tschauner, who raced 97 yards the other direction for a Permian touchdown and the first Panthers lead with 10 minutes to play.  That lead would be short lived as the Vikings re-knotted the game at 35-35 six plays later when Caleb Phillips scored from six yards out.

After forcing the Panthers into a three-and-out, the Vikes utilized a 10-play, 78-yard scoring drive to recapture the lead on a Dawson 29-yard touchdown pass.  Permian still had a chance to answer with under four minutes to play, but an intended pass for Hammond was intercepted at the 42 yard line.  Lamar administered the dagger with a 58-yard TD run by Phillips on the next play from scrimmage for the two touchdown lead.