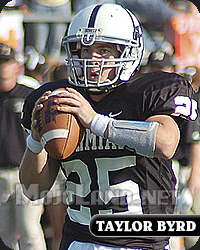 Abilene drew first blood and got on the scoreboard from running 12 plays that covered 62 yards.  The was the only drive in the first quarter to culminate into points.  The Eagles scored again early in the second period to take a 14-0 lead.

Permian responded with a 9-play 80-yard scoring drive, capped off by a 27-yard pass from Taylor Byrd to Joseph Knighten.

On the following possession, Eugene Neboh picked off AHS quarterback Spens Lackey’s pass and rambled 30 yards down the Eagle 3-yard line.  Byrd scored on the next play to knot the game at 14-14.  Abilene punted the ball back.  Jamison Berryhill reeled off a 24-yard run, and Permian made their way inside the redzone but the drive stalled.  Michael McNatt gave the Panthers their first lead on a 32-yard field goal and Mojo took the 17-14 lead to the locker room.

Midway into the third period, Abilene High coughed up the ball and linebacker Jerome Leija recovered the rock at the 47-yard line.  The Panthers had to settle with another field goal by McNatt to put Permian up 20-14.  The Eagles answered with 6-play 80-yard drive that ended with a 6-yard touchdown run with 23 seconds left in the quarter for Abilene High to regain the lead.

The Panthers drove to the Eagle 28 in the fourth quarter only to lose the ball on downs.  The Black Cat defense forced a three-and-out and Mojo wasn’t done.  Byrd and Berryhill finished off an impressive scoring drive with 6:41 left in the game.  Berryhill scored from 9-yards out and Byrd scrambled into the endzone for the two-point conversion.  The Panthers now enjoyed a 28-21 lead.  That’s how the game would end.

Berryhill finished with 92 rushing yards on 16 carries, while Byrd finished 15-of-23 for 212 yards through the air.  Ryan Rumbaugh led all receivers with four catches for 76 yards.